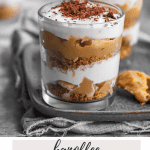 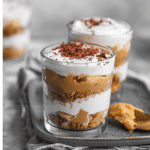 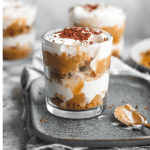 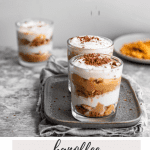 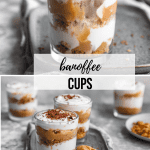 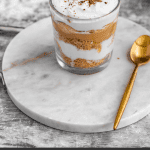 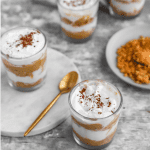 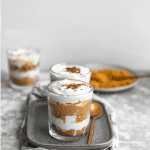 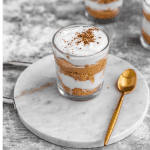 A classic banoffee but in trifle form, with these adorable little banoffee cups with layers of whipped cream, homemade toffee, sliced bananas and buttery biscuit crumbs.

What is banoffee pie?

A classic British dessert with a biscuit crust, a toffee or dulce de leche filling, sliced bananas, and a top layer of whipped cream. How could you go wrong with a combination like that? So named because it basically combines banana and toffee. Yum

Why should I make these banoffee cups?

These banoffee cups play off the flavors of a banoffee pie by placing them in layers in little individual cups. You get all the yummy flavors, but double layers of them!

They look so visually pretty, and are easy to serve as an individual dessert in parties.

Banoffee in general is a really easy dessert to make, and I think this version takes a lot less time because instead of boiling a can of condensed milk to make dulce de leche, you just need to cook the condensed milk for a few minutes in a saucepan.

What ingredients do I need to make banoffee?

Biscuit crumbs: Traditionally digestive biscuits are used, a super popular biscuit in the UK and Middle East. They have a mild flavor, similar to graham crackers, which is why graham crackers make a great substitute. Something else you might try would be lotus speculoos biscuits, or a mix of both!

To assemble the layers:

Sliced bananas with a squeeze of lemon juice to prevent the bananas from browning, and grated chocolate or cocoa powder for dusting on the top.

Prepare the crumb crust, by mixing together biscuit or cracker crumbs with melted butter and a pinch of cinnamon. To break the biscuits down into crumbs, you can use either a food processor, or place them in a freezer bag and bash them with a rolling pin.

Place a couple tablespoon of this crumb mix in the bottom of your dessert cups, press down the mixture lightly and place in the fridge to set a little while you prepare the toffee.

How do I make the toffee filling?

Add the butter and brown sugar to a saucepan, and stir until the butter melts and the sugar has dissolved. It’s ok if the butter and sugar separate a little, they’ll come back together once you add in the condensed milk. Add the sweetened condensed milk, and heat, stirring constantly. Keep stirring because this burns easily if left in contact with the saucepan for too long. Once the mixture comes to a boil, keep cooking and stirring for another few minutes until it turns golden brown and thickens, then immediately remove from the heat.

Make layers on top of the crumb crust of toffee, sliced bananas, whipped cream, and repeat! Depending on the cups you use you could have two layers or more, I had two. Garnish the top of the banoffee with grated chocolate (like Flake), or cocoa powder and store in the fridge for a few hours to set

Tips and tricks for banoffee success:

Make this your own! Adjust the thickness of the layers to your taste. If you have a sweet tooth, be more generous with the toffee. If you love bananas, slice them thicker!

To keep this visually pretty even after a few days in the fridge, toss the banana slices with lemon juice to keep them from browning.

Substitute the digestive biscuits for graham crackers or speculoos biscuits or a mix of any if you prefer.

To save on time, you can use ready made toffee or dulce de leche filling instead of making your own.

Heavy cream whips better when it’s cold, and in a clean bowl.

Banoffee pie doesn’t freeze well, but can be refrigerated loosely covered for up to 5 days. The whipped cream will flatten a little, but it’ll still taste just delicious. 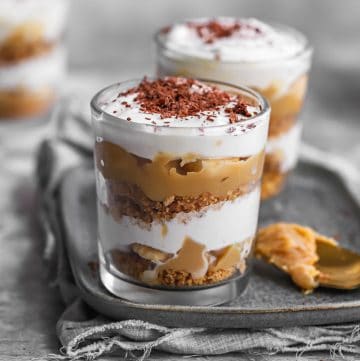