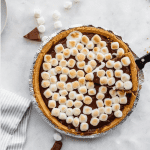 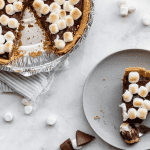 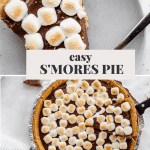 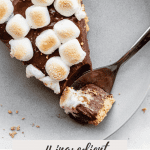 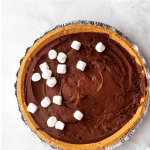 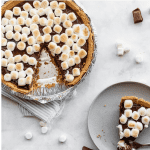 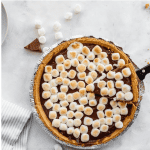 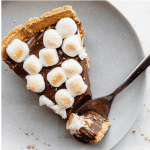 Choco mallow pie is the easiest nearly no bake four ingredient pie you can make, with a delicious chocolate ganache pie topped with torched marshmallows. The whole thing is reminiscent of a giant s’mores you can eat by the slice. What could be better!

This recipe is barely adapted from Food Network.

What is a choco mallow pie?

This is a basically like a giant s’mores bar. You have a graham cracker crust, a chocolate ganache filling, and marshmallow topping. Can’t not have a great result with those ingredients!

Why should I make a chocolate marshmallow pie?

I say this about a lot of my recipes, but this really is the easiest pie you could make!

I used a ready made graham cracker crust (But you could make your own and it’s super simple too), and with the ready made crust you only need four ingredients!

The filling is no bake.

The combination of graham crackers, chocolate, and marshmallows is a classic.

This is a very kid friendly treat. My daughter had the task of topping the pie with the marshmallows which she thoroughly enjoyed, and she certainly loved eating this too.

The marshmallows are conveniently broiled in the oven and it takes just 1-2 minutes. You don’t need a blowtorch, or a campfire to get that yummy toasted marshmallow flavor.

What ingredients do I need to make a choco mallow pie?

Chocolate: I used all milk chocolate to stay true to a traditional s’mores flavor, but you could use all semi-sweet, or a mix of 50% dark and 50% milk chocolate. It just depends on your flavor preference really!

Heavy Cream (Whipping Cream): This is what will be melted with the chocolate to make a ganache.

Marshmallows: I prefer the look of mini marshmallows (and I think it makes it easier to slice the pie) but you could also use sliced large marshmallows.

How to make this easy s’mores pie:

First: prepare the chocolate ganache. You can do this in a double boiler, but it’s even easier to melt the chocolate and cream together in the microwave. Just be sure to do it gently so the chocolate doesn’t burn. I like to take the bowl out every 30 seconds and stir gently, I do this for a total time of about 1.5-2 minutes or until chocolate has just melted. It’s ok if it doesn’t fully melt, once you stir to combine it’ll finish melting completely.

Second: Pour the chocolate ganache into the prepared pie crust and refrigerate either overnight, or for several hours (3-4) until set and firm to the touch.

Fourth: Chill again until the chocolate has firmed up once more (It’ll melt in the oven while you broil it). Once the chocolate is set, you can slice and enjoy!

FAQs and tips for success:

Use milk or dark chocolate or a mix of both, based on your preference. Be sure you use good quality chocolate because that’s the bulk of the pies flavor.

You can also use large marshmallows instead of mini marshmallows, just slice them up and top the pie with them.

Make sure you give the pie sufficient time to chill in the fridge, so that you can cut it and it’ll hold it’s shape instead of the chocolate oozing out everywhere. 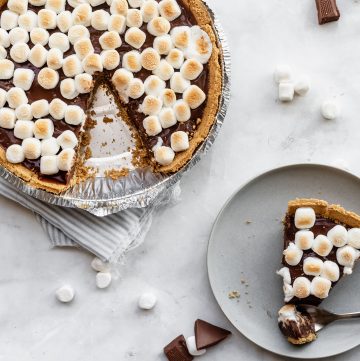 No Bake S’mores Pie by everylittlecrumb on Jumprope.