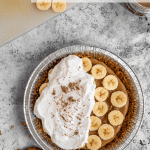 An easy and delicious version of banoffee pie that uses a quick stove top toffee instead of boiling cans of condensed milk. So much less fuss, and much better flavor. No bake pie made with a biscuit crust with a twist, and homemade sweetened whipped cream.

What is banoffee pie?

It’s a beautiful British dessert. It consists of a biscuit base, a thick layer of toffee, sliced bananas and whipped cream. It’s absolutely one of my favorite desserts ever! The name comes from combining the words banana and toffee together. I mean, how genius?

What makes this pie so good?

Made with a handful of ingredients that are easily found

It combines toffee with bananas- a perfect flavor pairing!

This is my favorite take on banoffee because you don’t need to boil any cans of condensed milk, the mix of biscuits gives a really nice change of pace, and the whipped cream cuts through the sweetness of the toffee filling.

You can absolutely use any biscuits you prefer. Graham crackers are the most common substitute for digestive biscuits, and do wonderfully here. You can use only one type of biscuit without mixing.

Tip: Make sure the biscuits are ground very finely so they stick together without crumbling too much, especially since we don’t use an excessive amount of melted butter in the crust.

Butter: Melted unsalted butter to glue together the biscuit crumbs.

Cinnamon: A pinch of cinnamon for flavor, optional.

Three ingredients to make the toffee:

Butter: Unsalted butter that gets melted, not too much!

Brown Sugar: I prefer dark brown sugar for that added molasses flavor, but light brown sugar works great too. This is also not a huge amount, much less than comparable recipes.

Sweetened Condensed Milk: Canned sweetened condensed milk that is added to the dissolved brown sugar and melted butter and cooked until golden brown and thick.

You can substitute all the filling ingredients for ready canned dulce de leche if you want, but I encourage you to make the topping from scratch. It’s yummier!

Sliced bananas: of course! I like to do a single layer in a concentric pattern on the toffee.

Icing sugar and vanilla: To slightly sweeten the cream and give it a little vanilla flavor.

Cocoa powder or flaked chocolate for decorating (and also giving a nice contrast of chocolate flavor). I like using actual flake chocolate, like this.

How do you make banoffee pie from scratch?

There are a few different components to a banoffee pie, all of which are very easily done.

To make the crust: Combine crushed biscuits with melted butter, and press into the base of the serving pan. You can use an 8 or 9 inch pan for this. I don’t bake the crust, I just chill it until the toffee is ready.

Make the toffee: This is where most recipes call for homemade dulce de leche, or boiling condensed milk for a few hours until it turns golden brown, like the method in this link.

Honestly- I’ve never done this and have no desire to worry about something on the stove for that long, so I went about this another way.

All you need to do is to cook the melt a little butter and brown sugar together, then add the condensed milk. Bring it to a boil, stirring constantly so it doesn’t burn, and once it turns golden brown, boils, and thickens the toffee is ready. It’s that simple!

Make the topping: The topping is sliced bananas, and heaps of lightly sweetened whipped cream.

I make sure that the whipped cream isn’t too sweet so it offsets the sweetness of the toffee. Heavy whipping cream is whipped with a little vanilla and icing sugar until soft peaks form.

Tip: Make sure the whipping cream is cold straight out of the fridge. It will whip faster!

How to keep banana slices from browing:

Toss them in a squeeze of lemon juice if brown bananas bother you! This will keep them from changing color.

FAQs and tips for success:

Pay attention to the chilling times. You’ll want to chill the crust base for 15 minutes or so, then once the toffee is poured onto the base, chill for another hour or until set.

Whisk the condensed milk constantly, because it can burn quickly. Keep your eye on it, it’ll thicken pretty fast

For ingredient substitutions, check the ingredient section above or comment below with any questions. 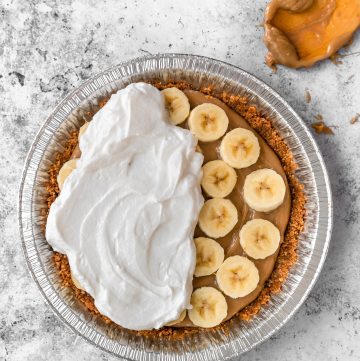 For FAQ and recipe substitutions, check the post above.