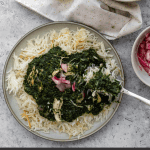 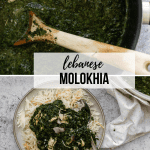 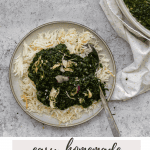 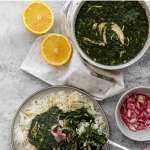 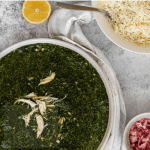 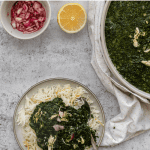 Mulukhiyah is a classic Middle Eastern dish, a delicious soupy vegetable dish made with Jew’s Mallow, a distinctive tasting leafy green. It’s cooked with chicken broth, and is utterly comforting.

Mulukihiyah translates to Jew’s Mallow, and is a leafy green vegetable, that turns into an almost gelatinous (some would say a little slimy) stew when cooked

Every region does it a little differently, with the Egyptian version usually having tomato in it. This is more of a Palestinian/Lebanese take.

Even within a certain country, every household has its own version of Mulukhiyah. My mom does a beautiful take with whole roasted chicken on the side. This is how my kids like it, not too thick and not too watery. They like the chicken shredded, and served with plenty of lemon juice.

How do you prepare mulukhiyah?

It is traditionally prepared by simmering in a stock briefly. We don’t boil for too long, so that it doesn’t become excessively slimy.

What type of stock to use?

The most commonly used is homemade chicken stock. Some people prepare it with meat, and meat stock. You can also in a pinch use store bought chicken stock, or bouillon cubes dissolved in water.

The advantage of using homemade chicken stock is that you can use the same chicken you cooked in the stock in the dish itself. If using storebought stock, you could always get rotisserie chicken and shred it in the mulukhiya.

The ingredients can be summed up into two parts:

I use a whole chicken cut into pieces, a mix of whole aromatics and spices, spice powders, and fresh vegetables. It usually looks like this:

Whole vegetables: Onions are essential, everything else is pretty much optional. I throw in whatever I have! Usually, carrots, fennel or parsnips, a bunch of fresh herbs like coriander.

The good thing is you don’t need to dice anything too finely, just roughly chop it all. The veggies will be discarded anyway so we are just using them for flavor.

You can find a complete post on homemade chicken broth here: I usually make a big batch and store it in the freezer, which comes in such handy. i usually have small bags of shredded chicken in the freezer that I got when I cooked the broth too, so that makes mulukhiya unbelievably easy to throw together.

The chicken stock is what we will use to cook our mulukhiya in.

I always always use frozen mulukhiyah. Some people might be scandalized by that, but it’s so much more convenient and easy! It tastes great too!

I like to use two bags of mulukhiyah so that I have a big pot of goodness, because leftovers taste amazing.

I also add a diced onion, and a very commonly added flavoring agent in the Middle East, which is sauteed fresh coriander and plenty of crushed garlic.

This along with coriander powder, seven spice or mixed spice powder, and salt and pepper gives all we need as mulukhiyah has its own very distinct flavor.

One trick of my moms is to add an ice cube to the mulukhiya as it cooks, she says it reduces any excess sliminess. I have no idea if this is an old wives tale, but I do it anyway! It’s fun to carry on these traditions.

First prepare the chicken stock. Place all the stock ingredients in a large saucepan, from the chicken to the veggies to the spices, and cover with water until all the chicken is submerged.

Bring to a boil, and skim the foam from the surface and discard. Once the water has come to a rolling boil, reduce the heat to a simmer and simmer uncovered for 3-4 hours. You might need to skim the foam off a few times while cooking.

Into the stock, add a diced onion, the spices, and frozen bags of mulukhiyah. The cool part is, you don’t need to thaw them. Over medium heat, let the mulukhiyah simmer and melt, and heat through. Add the shredded chicken back in, and just as the mulukhiya is about to boil, turn off the heat. You are done!

What to serve with:

Always fresh lemon juice, and lots of it. Don’t add it to the pot on the heat, but serve it on the side for everyone to put as much as they want.

Another thing I love serving with is pickled red onions. All you need is to take a small red onion, dice it finely, and place in a bowl and cover with apple cider vinegar. Store in the fridge until ready to use- the longer you store the more pickled it’ll taste so I like making this a couple hours in advance.

Of course, we love serving mulukhiyah with vermicelli rice. I have a great post on how to make it here– it’s so simple and the perfect accompaniment. 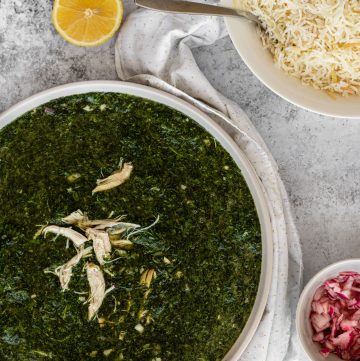 For the chicken broth:

For an extensive post on making chicken broth, check this recipe. Can substitute the whole spices, and powdered spices, and vegetables for the chicken broth for any of your choice. For a side vermicelli rice recipe, check out this post.