Chicken kabsa is a traditional spiced rice dish originating from Saudi Arabia. Famous for a good reason: rich chicken flavor, fragrant spice, sweetness from shredded carrots and raisins. The chicken is boiled to make it’s own stock, then broiled in the oven till golden brown and crispy. Topped with fried golden nuts, and fresh herbs, it’s a revelation.

Making kabsa intimidated me, as tasty as it is. Gulf-centric dishes are definitely not my area of expertise. It took long enough for me to get the hang of Palestinian dishes. Then, my Saudi friend forwarded me this video. My friend raved about it, so it got the stamp of approval of someone very familiar with kabsa, and the video itself has almost 2 million views. Sold! I adapted quite a few things to suit my own preferences, but this was a great base to start with.

First, cook onions and ginger in oil until fragrant. Brown the raw chicken in this deliciousness, and add some spices, diced tomatoes, tomato paste, and water to cover the chicken. Boil the chicken until cooked through, then transfer the chicken to the oven to crisp it up. Cook the rice and shredded carrots in the same tomato spiced chicken stock.

Feel free to riff, but this recipe calls for homemade kabsa spice consisting of cardamom, dried black lime(loumi), cinnamon powder and cloves powder. I also added some store bought kabsa spice because I had it sitting around and figured why not. Loumi, or dried preserved lime is used in a lot of Gulf recipes. It’s hard to explain what it is, so if you don’t know check out this link. It gives a strong, citrusy and pungent flavor to your dish. Lots of umami!

Rice gets all its flavor from being cooked in the chicken stock sauce, with some shredded carrot that give it some barely detectable sweetness. Soak and rinse the rice well to make sure it cooks perfectly. Mine was a bit mushy, I might have had too much liquid in the first place but we loved it regardless.

Traditionally, kabsa is made with skin on chicken. My husband has a thing with chicken skin, so we did ours with skinless chicken. The butcher removed the skin and quartered the chicken for us, so he did all the hard work. It still comes out great, but it won’t look as brown in the oven. You do have the option of cooking it with or without skin depending on preference. The chicken needs to finish cooking stove top in the water, so by the time you broil it in the oven all it really needs to do is get some color and crisp on it.

Very important. I’m usually pretty flexible with garnishing. I’ll tell you it’s optional or if desired. In this case, toasted nuts are NOT optional. They are absolutely essential for a delicious chicken kabsa. You can however choose what nuts you use. I recommend cashews, peeled whole almonds and pine nuts. Toast them in some hot olive oil until golden brown and crispy, and keep them aside. You’ll also toast some golden raisins until they kind of plump up and turn golden brown. I used to push the raisins on kabsa to the side (yes, I also avoid them in um ali) but now I embrace that little burst of sweetness that comes through when I bite into one. For some color, sprinkle some fresh herbs like coriander on top.

Chicken kabsa is usually served with daqous, which is a Gulf flavored spiced tomato sauce. You can also eat it with yogurt, a yogurt and cucumber salad, or a green salad.

So without further ado, I hope you make and enjoy this kabsa! If you have any kabsa making tips or anything else on your mind please leave a comment below. 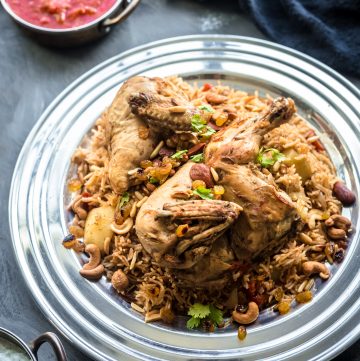 For the kabsa garnish: