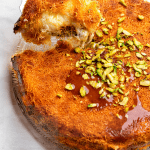 The perfect kunafa. Crispy shredded pastry, ooey and gooey stretchy cheese, and a rose water scented creamy semolina pudding. And this is all a lot more approachable than you might think!

I never, ever appreciated the beauty of Kunafa until I grew older. I clearly remember as a kid and teenager declining the obligatory family gathering kunafa without the faintest idea of what I was missing.

So much lingering regret about how much kunafa I missed out on eating. I’m spending my life making up for lost time. The best kunafa is in Jordan (yes I’m going there) with the exception of kunafa bilkaak from Lebanon- that’s kunafa that’s placed in toasted sesame kaak bread and soaked with syrup.

I reside in Bahrain, so both are out of my reach and I knew I needed to find the perfect recipe for whenever my craving hits.

So what is Kunafa?

It is a glorious confection of soft melty cheese (or cream), sandwiched with shredded phyllo dough, and soaked in a rose and orange water scented syrup.

It’s baked until golden brown and crispy. EAT IT WARM, when the cheese stretches out in soft strands to contrast with the crunchy bottom and upper layer.

Traditionally, it’s made with Akkawi or Nabulsi cheese. With these cheeses, you need to desalt them by soaking them in water. Those can be hard to source, and they need a lot of prep work before they can use them. They are really, really salty off the bat.

However, this recipe adapted from the amazing Cleobuttera uses none other than very accessible mozzarella cheese!

I love this recipe. It uses both mozzarella cheese and a rose water scented semolina pudding, ensuring the filling stays soft and gooey and the cheese doesn’t harden once out of the oven.

What are the different types of kunafa?

The first thing you need to consider is the dough.

Kunafa Naameh: is made with a semolina based dough that is then ground into a breadcrumb type texture. It’s usually more work because you need to make this dough from scratch. It’s usually one layer- one layer of cheese topped with one layer of the semolina dough.

Kunafa khishna (coarse), what we are making today, is usually made with a special shredded phyllo dough, which is usually found in the freezer section. This can be one layered (cheese topped with the dough) or two layered like this recipe, where the cheese is sandwiched between two dough layers.

If you can’t find it, you can try this recipe I have for kunafa kazaba (translates to lying kunafa lol) which uses breadcrumbs for the crust! It’s delicious too.

The second consideration is the filling: cheese or cream?

What makes this kunafa so good?

It’s the perfect marriage of kunafa bil-ishta (kunafa stuffed with cream) and kunafa biljibne (cheese kunafa). You get the best of both worlds- the stretchy oozing cheese, and the smooth and rich cream.

The cream keeps the knafeh moist even when it cools, as opposed to recipes using only cheese which hardens quickly at room temperature.

The recipe below seems like a lot of steps, but you get through them quickly!

Plus, you get the ultimate reward at the end. It is absolutely delicious. Just make it. Enjoy it with friends, and a warm cup of red tea!

If you’ve never tried this completely classic and delicious Middle Eastern desset before, trust me, now is the time.

We use sugar syrup in a lot of Middle Eastern desserts. It’s a fragrant syrup enhanced with rose water and orange blossom water

The ratio of sugar and water is nearly double the sugar to the amount of water.

What is rose water and orange blossom water?

Simply put, the water made from steeping rose petals and orange blossom petals. They both have a very distinctive flavor that’s floral and beautifully scented. They are very commonly used in Middle Eastern cuisine and we often use orange blossom water to help with stomach ailments!

To make the sugar syrup, we combine sugar, water and lemon juice in a medium saucepan over medium high heat. Stir a little initially to dissolve the sugar, then back off so the sugar doesn’t crystallize.

Let the mixture come to a boil, then reduce heat and simmer for 10-15 minutes. It will still be a little liquidy, sort of the texture of pancake syrup- not as thick as honey. Set aside to cool slightly while you prepare the rest of the kunafa. Once off the heat, add in the rose water and orange blossom water.

This recipe makes a pretty good amount, but leftover syrup will keep well in the fridge for 7-10 days, and I always serve kunafa with extra syrup. I always ladle on more for myself before eating!

The semolina pudding is made with a mixture of milk and heavy cream for richness, semolina, sugar, a little cornstarch to thicken, and rose water that gets added off the heat.

You add these to a pan on medium high heat, and be sure to keep whisking so the pudding doesn’t clump up. Once it boils, reduce the heat and keep whisking around 5 minutes until pudding thickens. Let it cool slightly at which point it’ll thicken some more.

The easiest cheese filling you’ll ever make for kunafa! Simply mix together mozzarella cheese with a little sugar and rose water for a touch of sweetness and fragrance. That’s it!

Any mozzarella works- you can get it grated fresh at the deli counter, or in a packaged bag. I’ve done both and they both turned out equally well.

Make sure the dough is thawed enough to be able to handle, but it really shouldn’t take that long to thaw on the countertop.

Shred the dough evenly into 1 inch long pieces. I use a combination of my hands and kitchen scissors, figure out what works with you!

Pour the melted ghee or butter on top of the dough and work this through evenly. This is much easier using your fingers. You want to make sure the dough is evenly coated so that the kunafa takes on an even golden brown color and crisps up beautifully in the oven.

This makes one large kunafa (12 inches, a deep pan) or two smaller shallower kunafas, 9 inches each. The kunafa photographed on the grey linen is the 9 inch one, and the one on the white background is the larger one.

If you split the mixture into two kunafas, you can freeze one before baking to bake at a later date. Let me tell you, that is one pleasant thing to find in your freezer! Just thaw it in the fridge overnight and bake as directed.

Bake at 390 F (200C) until golden brown and crispy, around 40-45 minutes. As soon as it comes out of the oven, pour a good 1/2- 3/4 of the sugar syrup you prepared immediately onto the hot kunafa to soak in. Let it stand just a few minutes, then turn onto a serving plate and serve hot with extra syrup on the side.

Recipe below adapted from Cleobuttera.

Leftovers will last 2-3 days in the fridge, or 2-3 months in the freezer.
Either way, you can reheat in a hot oven or in the microwave.

You can also store unbaked kunafa in the freezer for 2-3 months, thaw overnight or for several hours then bake as directed in the recipe 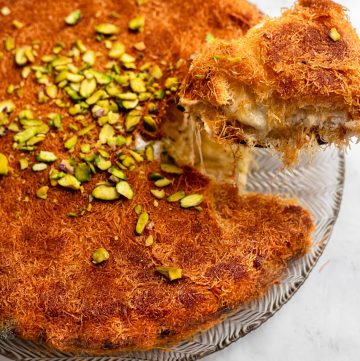 FOR THE SUGAR SYRUP:

FOR THE SEMOLINA PUDDING:

FOR THE CHEESE FILLING:

FOR THE KUNAFA CRUST:

TO MAKE THE SEMOLINA PUDDING:

TO MAKE THE CHEESE FILLING:

TO ASSEMBLE AND BAKE:

Makes either one 12 inch pan or two 9 inch pans (you can make one and freeze the other before baking for the future) Recipe adapted from Cleobuttera
Keyword cheese, dessert, lebanese, middle eastern 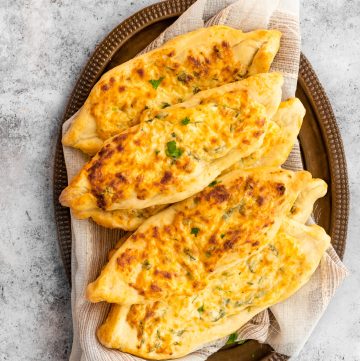 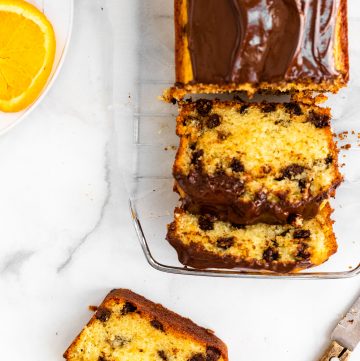 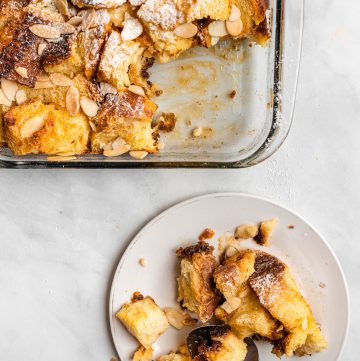 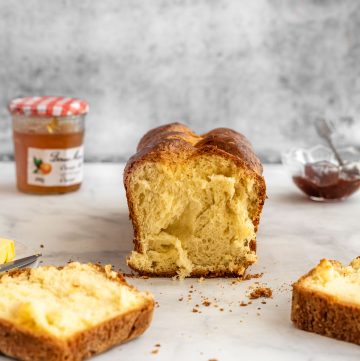 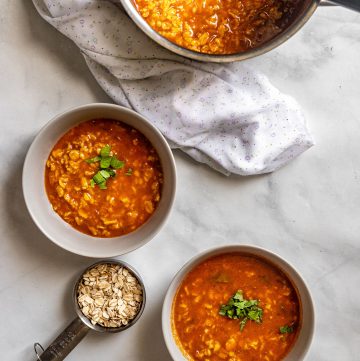 Wishing you a Saturday with good coffee and lots o

Why not welcome the weekend with some homemade cre

Had a photography shoot @vanilleksa yesterday, and

I’m very excited to be doing a live session with

The date nut bars that took Ramadan by storm! Have

One of my favorite of the recipes that went viral

Here goes, the recipe I followed for copycat @leva