Mini kunafa made in a muffin tin, and simplified by using breadcrumbs instead of the traditional kunafa dough. Absolutely and utterly delicious, these will become an instant favorite!

Kunafa is a very traditional Middle Eastern dessert. It’s generally made with sugar syrup soaked shredded dough, and some form of local cheese.

What is kunafa made of?

To answer that, I need to talk to you about the different types of kunafa:

Kunafa khishna (or coarse kunafa) is made with torn shredded phyylo dough (kataifi). I have an amazing recipe for that here:

Kunafa Naameh (or fine kunafa) is typically made with with a baked semolina dough that’s ground into a finer powder. Some preparations will include the same phyllo kunafa noodles used in khishna kunafa but shredded finely.

Kunafa Kazabeh (literally translates into lying kunafa): a really fun, easier and more modern preparation. Blitzed white bread slices in a food processor give you breadcrumbs, and that’s what we are making in this recipe! That’s why it’s called a lying kunafa, because it’s kind of like a cheat, but a delicious one at that!

All preparations are mixed with ghee or butter, so that the dough crisps up and takes on a deep golden color when baked. Some people add a special powdered orange food coloring for that characteristic bright orange color, but I’ve never found that to be necessary.

The cheese: Usually Akkawi and Nabusli cheese are used. They are salty white cheeses, that need to be desalted by boiling or by soaking for hours in water, changing out the water every couple of hours.

I make it easier! I have a mozzarella cheese hack that lets you use the cheese as it is, and trust me it tastes just as delicious.

The sugar syrup: This is very simply prepared in 15 minutes. Mix sugar, water, and a squeeze of lemon juice in a saucepan. Bring to a boil, then simmer undisturbed for 10-15 minutes until slightly thickened.

After it comes off the heat, add orange blossom and rose water, two VERY important parts of kunafa. They give this beautiful fragrance and flavor.

How to make mini kunafa:

A muffin tin is just the tool you need! Instead of assembling a larger pan, you get individual little kunafas which are perfect for portion contol, and so much fun to serve to a group. They freeze so well too!

You could definitely make this recipe as an individual larger sized kunafa, using an 8-9inch circular pan.

You have three components to this kunafa:

The crust is made with soft white toast slices. The regular bread you get at any supermarket. Cut the crusts off, and blend in a food processor or blender until fine crumbs form.

Mix the crust with melted butter until well coated and glistening with butter, and set aside while you prepare your filling:

This is our hack. Mozzarella cheese for the win! It actually works perfectly. Mozzarella is both mild and melty and stretchy, exactly what we look for in a kunafa.

Technically, a block of mozzarella cheese from the deli grated fresh in store should work better than the packaged stuff. The packaged stuff is usually coated in some cornstarch to prevent the strands from clumping together, which might make it a little harder to melt.

Honestly? I’ve used packaged mozzarella multiple times and it’s worked out great, so use whatever is easier and don’t sweat it!

This is optional, but I add a little bit of sugar and rose water to the cheese tot give a hint of sweetness and the beautiful floral flavor of rose water.

This is a beautiful creamy pudding that works in tandem with the cheese to provide the perfect filling.

What happens is the cheese gives stretchy gooeyness, and the pudding keeps the kunafa creamy and luscious even when the cheese has hardened.

The way we accomplish this is with a traditional Middle Eastern semolina pudding. If you have semolina on hand, it’s easier than you probably think!

You mix milk, heavy cream, semolina powder and a little cornstarch together, whisking constantly over medium high heat till the mixture thickens into a pudding. Off the heat add… you guessed it, rosewater lol!

The pudding has a great distinctive texture. It’s actually the basis of several Middle Eastern desserts I hope to visit in the future on this blog!

LIFE HACK! Can’t find semolina or don’t want the extra step of making the pudding? You can substitute ready cream. I tested the recipe with both, and they were honestly both delicious.

I slightly preferred the semolina version, but the difference was such that some people couldn’t even tell there were two versions. It would probably be more obvious in a full sized kunafa!

Substitute the pudding for some ricotta cheese if you like! It’ll be delicious!

I recommend lightly greasing muffin tins with a little butter or pan spray so that these release more easily after baking.

After 20 minutes take a peek. If the kunafa has turned light golden brown on top, and a deeper color on the sides (use a little spoon to pull kunafa away from the sides of the pan to check), it’s done. Otherwise, give it another 5 minutes. The exterior should be crunchy and delicious, and the inside creamy and molten.

As soon as it’s out of the oven, use a small spoon and drizzle a teaspoon or two of sugar syrup on each cup. This will get it to soak right in. This might be enough sweeetness for some, but I always, always have it with extra syrup.

Wait a few minutes until you can handle the kunafa more easily, then run a small metal spoon around the sides of each kunafa to loosen from the sides of the tin, then sort of pop them out. Flip upside down onto a serving platter so the side that was on the bottom of the muffin tin is now on the top.

Sugar syrup on it’s own should last 2 weeks- a month in the fridge.

You can refrigerate kunafa for a couple days in the fridge. Heat in the oven preferably, so they don’t get soggy, or microwave in bursts.

Can kunafa be frozen?

You can assemble the kunafa and freeze before baking. They are so tiny, they won’t require much thawing. Just keep them on your countertop while you heat the oven.

You can also bake and freeze any extras. Just heat in the oven or microwave.

Cooked and uncooked mini kunafas should last about 3-4 months in the freezer.

How to serve kunafa:

It’s best eaten hot and fresh, traditionally with pistachio slivers or powder on top. I can’t emphasize enough how important the extra sugar syrup is- and this recipe will give you plenty! I like to drench my piece in sugar syrup, and it will give you that beautiful rose water and orange blossom water flavor. Eating kunafa is not the time to worry about calories. 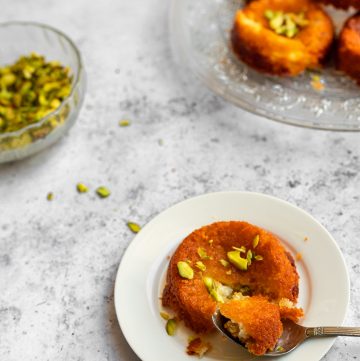 For the kunafa crust:

For the sugar syrup:

For the semolina pudding:

For the cheese filling:

For the semolina pudding:

For the mozzarella cheese:

For the kunafa crust:

To assemble and bake:

Recipe for semolina pudding and sugar syrup adapted from Cleobuttera

Kunafa– made with the original dough