An easy throw together lamb mince with Middle Eastern spices, the starting point of many of our recipes. You can make a big batch and freeze some for the perfect shortcut for future cooking!

What is lamb mince?

Lamb mince is the starting point for a lot of Middle Eastern recipes. We use it to make a simple spiced rice dish, to top cooked eggplant with, top pasta in yogurt sauce with (like one of my favorite throw together meal ever) for shepherds pie, bolognese, to fill kebbe with.

Lamb has a distinct flavor that is enhanced with spice but still kept simple. That being said, you can absolutely follow the below recipe and use ground beef instead of lamb. That’s something we do all the time!

It’s close, but according to this article , lamb might emerge victorious. It is fattier than beef, but has good quality fats, with a good ration of omega 3 and omega 6 fatty acids. It is also much more likely to be grass fed than beef (which is usually grain fed) which means it’s more digestible and has good quality protein sources.

How to cook lamb mince:

You need a good amount of onions and garlic to keep the meat from tasting- well, too meaty. The recipe calls for red onions, but you can use any, just don’t be shy with the quantity. You start with a large skillet that’s been coated with olive oil and is heated on medium high heat, and sauté until softened.

Crushed garlic is another essential ingredient, but it goes in after the onion so that it doesn’t overcook. Just a minute or so in the skillet, then the minced lamb goes in. Stir and break it apart a little, then dump in all your spices: seven spices, ground cinnamon, salt and pepper. That’s the basis of Middle Eastern spiced meat! Keep cooking and stirring until meat is brown and completely cooked through with no pink bits.

How to keep minced meat from clumping:

I don’t like big clumps of meat, so I’m very vigilant to keep breaking it apart as it cook with a wooden spoon. Tip: I sometimes even use a potato masher and squish the meat until it breaks apart. You want the minced to be evenly textured and bite sized.

That’s about it! I usually make a big batch, same as the recipe quantities below, so that I can freeze at least half of it for use in other recipes. Makes prep so much easier in the future!

How to store minced meat:

Cooked minced meat will last for three days tightly covered in the fridge.

How long does frozen cooked minced meat last in the freezer?

It lasts up to four months, tightly covered. I like to weigh out individual portions (however much I’d typically use in a recipe- like 300-500g (up to 1lb) and keep them in freezer safe Tupperware or freezer bags, labeled with the date I froze them. Then, I can thaw individual portions either overnight in the fridge, or in the microwave right before using.

Lamb mince recipes to use up your mince: 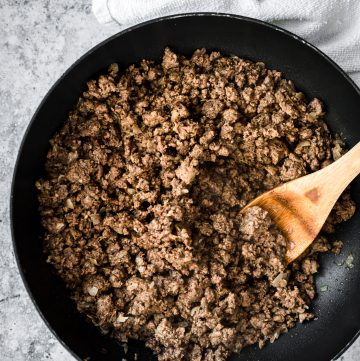 *The same technique and ingredients are used for either beef or lamb mince, so use whichever meat you most prefer.
Tried this recipe?Mention @everylittlecrumb or tag #everylittlecrumb! 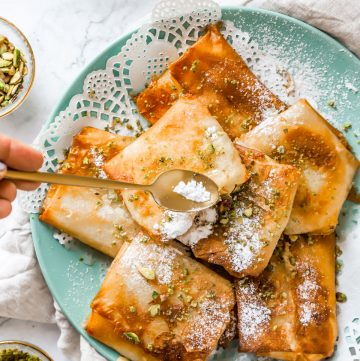 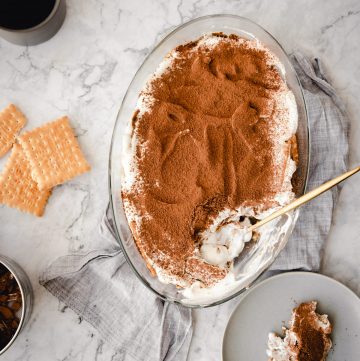 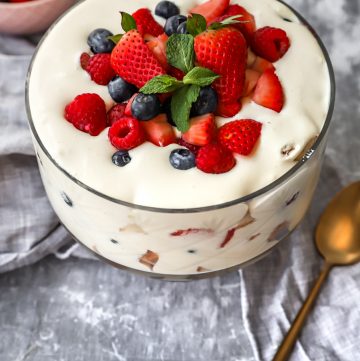 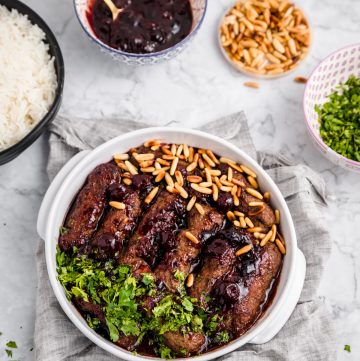 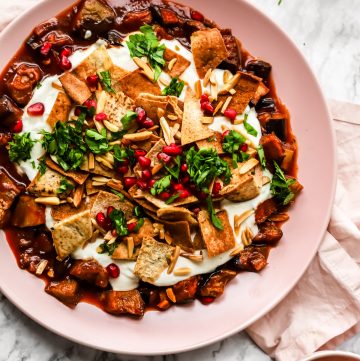 You have to know, if I post a chicken recipe it me

This is my go to baked creamy cheesecake. It’s s

This, to me, is the sambosa that best embodies Bah

A biscuit base topped with a super easy smooth, cr

Want a Ramadan dessert that takes minutes to make

Ramadan Kareem! And the first recipe is for these