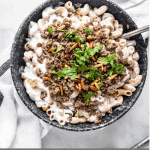 One of the simplest meals in Middle Eastern cuisine, this is a pasta dish with a chilled yogurt garlic sauce made simply with 3 ingredients, topped with Middle Eastern spiced meat, pine nuts, and chopped parsley. Macarona billaban is so good, and ridiculously simple.

Macarona Billaban literally translates to yogurt macaroni. It’s probably the Middle Eastern equivalent of macaroni and cheese, but sorry to say it-SO MUCH BETTER. This is coming from a big mac and cheese fan, but macarona billaban is so much lighter you can eat a lot more of it. It’s way healthier too!

It’s the dinner of a busy mom who had no time in the kitchen that day, or one with really picky kids who barely eat anything. A meal I ate so many times growing up, but it remained special each and every time. It’s also one of the meals my dad (who wasn’t usually in the kitchen) made us, when we’d be whining that we were hungry and there was no time to think about a more elaborate meal. It’s kind of a peasant dish, but one that is universally loved.

So what is macarona billaban? A very simple dish of cooked pasta that’s tossed with yogurt sauce with a good hint of garlic, usually topped with spiced minced meat. To finish it off, I find toasted pine nuts to be essential, as well as a big handful of fresh chopped parsley.

The sauce: Simply stir together yogurt, crushed garlic and salt. Go for less garlic if you like a milder flavor or more if you are a garlic lover like me. Mix it all up and taste. Add more or less salt and garlic as per your preference! You can also add dried mint if you prefer, I never do.

The pasta: Typically I like elbow macaroni. Brings back all those childhood memories. I’ve grown up a little since then and I use whole wheat elbow macaroni pasta, but have tried this with spaghetti and penne- it’s all good!

The meat: I nearly always make this with cooked spiced ground beef that I’ve frozen. It’s such a good use of leftover meat. I included the recipe I use for most of my Middle Eastern ground meat dishes. You can use beef or lamb, and you can also completely leave it out for a lighter vegetarian dish.

The garnishes: For me, the toasted nuts mandatory, and the more the better. Especially pine nuts. They give so much depth and flavor. I always pile mine on! You can also add toasted almonds. Some people use parsley on top, some coriander/cilantro, I grew up with parsley so that’s what I do!

They toast really quickly, so the important thing is to keep an eye on them and stir constantly so they don’t burn. I heat some olive oil in a small skillet over medium heat, then add the pine nuts and stir stir stir till they turn golden brown. At this point, immediately remove them from the heat into a separate small bowl until ready to use, otherwise they’ll continue cooking in the residual heat of the pan even if it’s off the stove.

To assemble, you toss however much pasta you’ll eat immediately with your desired amount of yogurt sauce-based on the sauciness you like. Top with the minced meat, toasted pine nuts and chopped fresh parsley. It will basically be room temperature, which is the way I like to eat this dish.

I do not like leftover macarona billaban one bit- at least not when the pasta has been combined with the yogurt sauce THEN stored in the fridge. The yogurt turns clumpy and cold and basically stops being a sauce and starts being dry flecks of yogurt. Not appealing. I usually have leftover pasta though and I needed to find a hack, so this is what I do. I store the leftover pasta without any sauce in a container in the fridge, and the leftover yogurt sauce in a separate container. Any extra meat also gets stored in it’s own container. Leftover pine nuts go on the counter.

When I want to eat, I pour some hot water over the cooked pasta to freshen it up a little, drain it, then mix it with my desired amount of yogurt sauce, top with some more meat and some pine nuts and parsley. Sometimes I heat the extra meat separately, sometimes I eat it cold. Either way it’s delicious, and solves all my leftover problems. 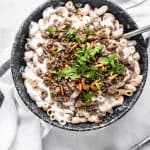 For the yogurt sauce:

To toast the pine nuts, heat 1 tbsp of olive oil over medium high heat in a skillet. Once oil is hot, add the pine nuts, and stir constantly until they turn golden brown, then remove IMMEDIATELY from the heat and place in a separate bowl to prevent further browning. Cool until using.   *If you won’t eat all the pasta at once, only combine enough pasta and yogurt as you need for your current serving, and store the cooked pasta and yogurt sauce separately in the fridge. Every time you want to eat some, combine the pasta and yogurt on the spot because the yogurt clumps and hardens once combined with pasta and it isn’t as appetizing. Topping with pine nuts and parsley should also be done right before eating.

If you liked this recipe, try:

Load up on new recipes and exclusive updates!

Hi! I’m Farah. I’m a dietitian by training, but a full time food lover and recipe developer. I love anything to do with food. 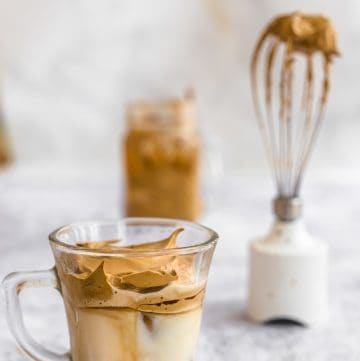 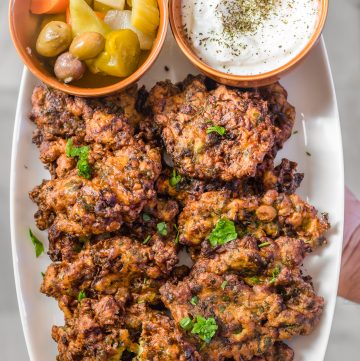 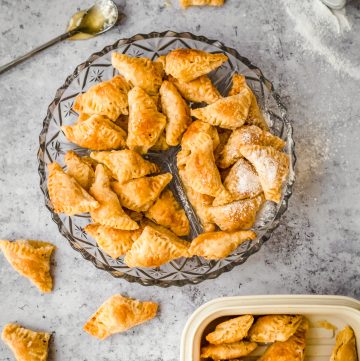 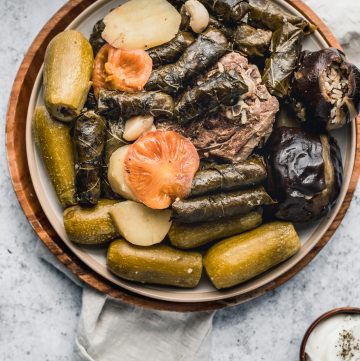 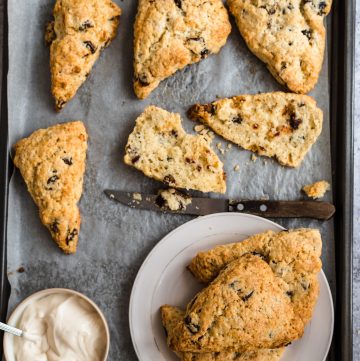