Not your typical shepherd’s pie, this Indian spiced shepherd’s pie is flavor to the max with minced meat enhanced with curry spices, topped with a creamy fluffy mashed potato and baked till golden brown and delicious.

What is shepherd’s pie?

It’s a layer of cooked and spiced minced beef that’s topped with a mashed potato layer and baked until golden brown. You then cut slices out of this just like a casserole. It’s a traditional English dish, and is usually made with lamb. I used beef due to our family preferences, but you can use any red meat or even ground turkey.

Yes! Because the Indian spices used in the meat mixture add SO MUCH FLAVOR. I always used to like the concept of a shepherd’s pie, but would always find it a little bland and hard to get excited about. We have something similar in Middle Eastern cuisine called batata souffle. I wanted something similar but with a more explosive flavor, so I started brainstorming and researching. I basically ended up adapting and combining two different recipes. This one for the meat, and this for the topping.

What is used to give all that flavor?

Ginger, garlic, and green chili pepper are sauteed in oil, then garam masala and paprika powder are added. The tomato sauce gets poured over this mixture, and completely infused with all those spices and herbs.

Also, the meat itself is cooked with red bell pepper and onion, and mixed with toasted cumin seeds (another big flavor star). I always add all spice or seven spices to my ground beef, then this gets mixed with the tomato sauce.

How to make the mashed potato topping?

The best part of the mashed potatoes on top is how creamy they are. I outlined several tips to help you achieve this:

Cube the Potatoes evenly so they cook through at the same time.

Add the potato cubes to cold water that you then heat so they cook through evenly. I explain this in more detail in this delicious recipe here.

Drain and return potatoes to saucepan to further evaporate any water, mash evenly, and add WARM cream and butter to them.

Add an egg yolk to the mashed potato mixture to bind it together and give it a golden color when baking.

Can I substitute lamb for the ground beef?

Can I make this more/less spicy?

Yes, to make it more spicy, dice up the green chili you add to the ground beef. To make it less spicy, omit it all together. Keep in mind, the recipe as written isn’t very spicy, my 4 year old ate it without a word.

Can I omit the egg yolk in the mashed potatoes?

Yes you can, just put a few pats of butter on top before baking to get a golden look.

Can I make and freeze the shepherd’s pie?

Yes, for up to two months tightly covered, you can assemble the pie and freeze it, or assemble bake and freeze it. You can heat/cook it directly from frozen.

You can also assemble the Indian spiced shepherd’s pie up to two days in advance and keep it in the fridge before baking. 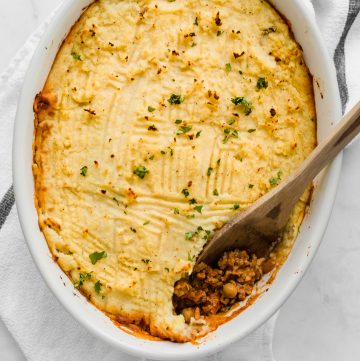 For the tomato sauce:

For the mashed potatoes:

For the tomato sauce:

For the meat filling:

The meat filling was adapted from Aarti Sequeira . The mashed potato topping is from Alton Brown