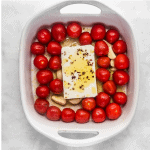 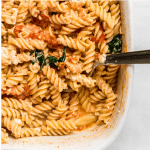 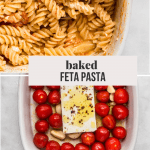 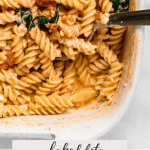 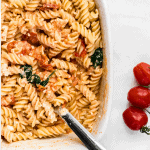 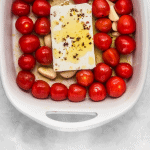 This viral baked feta pasta definitely lives up to the hype. It’s the easiest meal ever, and it’s creamy, tangy and full of flavor.

Should I make this viral baked feta pasta?

Yes! I was so surprised by how much I enjoyed it. I actually avoided making it for so long because I was sure it would be overhyped, but happily I was wrong. The version I tried is adapted from the one I saw on feelgoodfoodie.

The sweetness of the burst cherry tomatoes contrasts so well with the tangy salty feta. It really makes the perfect pasta sauce.

You don’t need to make a traditional sauce on the stove, mixing and simmering and going through all those steps. You just throw the ingredients into a baking dish and they cook in the oven. It’s so easy.

You can adjust this based on your preference. Use the type of pasta you like, any additional herbs or spices, you can even try this with other creamy cheeses like burrata, ricotta, goats cheese.

What ingredients do you need?

Garlic: I like to roast this alongside the cherry tomatoes instead of adding the raw minced cloves like some other recipes.

Baby Spinach: Totally optional, but if you have it on hand it’s nice to throw in a big handful after cooking to add some color and flavor.

Pasta: I used the corkscrew type pasta which soaked in that good sauce really well, but use whatever you like. Try elbow macaroni, penne pasta, bowtie pasta, or even spaghetti or linguine.

How do I make baked feta pasta?

You basically need to do two things. Make the feta tomato sauce, and cook the pasta. That’s it!

To make the sauce, you layer the base of a serving pan with cherry tomatoes. I used a deep 8×8 inch pan. Drizzle with olive oil, and season with salt and pepper. Scatter garlic cloves on top.

Place the feta block on the layer of tomatoes, and drizzle some more olive oil on the feta. I like to sprinkle the red chili flakes and dried basil right on the cheese.

Bake in a 400 F hot oven for 35 minutes. While the feta and tomatoes are baking, make the pasta al dente according to package instructions. Once you drain the pasta, reserve some pasta water in case you want to use it to thin the sauce.

You’ll know the sauce is ready when the cherry tomatoes will have softened and begun to burst, and the feta might be browning at the edges. Immediately use a spoon and mix the cheese into the tomatoes, it’ll melt and turn creamy right away, you can see in the video embedded in the recipe card.

If using baby spinach toss that directly into the sauce, it’ll almost immediately start to wilt. Toss in the cooked pasta until well coated and enjoy immediately!

I’ve only tried the recipe as is, but based on what I’ve seen other people do online the following substitutions seem to have gotten great results:

Cheese: Try with ricotta cheese, goat cheese, or try adding a big dollop of cream cheese after baking for even more creaminess.

Pasta: The pasta part is super flexible because it gets cooked separately. You can use gluten free pasta, whole wheat pasta, and any pasta shape of your choice.

Tomatoes: Use cherry or grape tomatoes for the best results. You could probably even use large chunks of plum tomatoes, but the sweetness that the smaller tomatoes gives is really key. 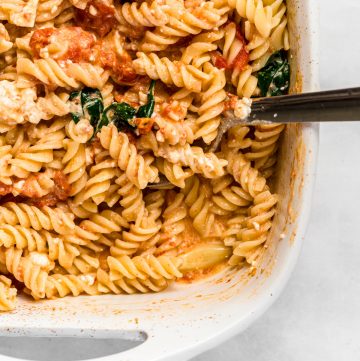 Adapted from the viral baked feta pasta trend on TikTok, popularized by feelgoodfoodie, grilledcheesessocial and liemessa.