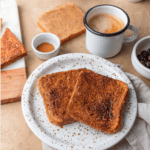 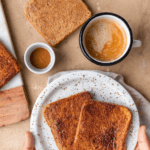 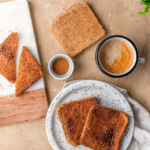 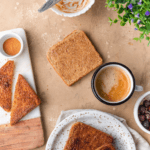 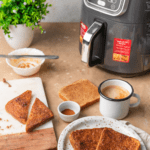 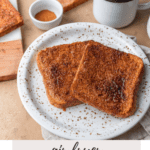 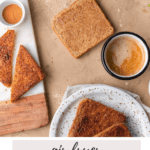 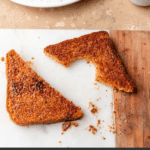 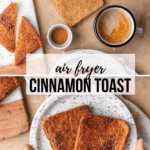 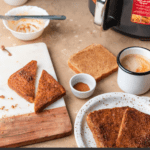 What is air fryer toast?

Basically, toast made in an air fryer! And it makes complete sense too. The way an air fryer cooks is almost like a convection oven, with really hot air circulating around a small space. This gives you the perfect crunchy, crispy, toast.

Air fryer cinnamon toast goes one step further. Cinnamon sugar butter is spread on the toast and the toast is then air fried. It’s so good! And such an easy breakfast or treat to make.

Why should I make air fryer cinnamon toast?

Air frying the cinnamon toast makes it so crispy on the edges and bubbly and delicious in the middle.

It’s such an easy breakfast or treat to make with just a handful of ingredients.

Instead of turning on the oven to broil the toast to perfection, you can do it all in much less time in a handy little air fryer.

This is such a comfort dish. Toast and cinnamon, a match made in heaven.

This recipe is adapted from Pioneer Woman’s cinnamon toast, but with a LOT less sugar. Still delicious!

What ingredients do I need for air fryer toast?

Bread: Whole wheat bread is my go to here, it gives that heartiness to the toast. You can definitely use white bread if you prefer

Butter: The important thing is that the butter is at room temperature to make it easily spreadable. I used unsalted butter, and added a pinch of salt, but you could substitute both for salted butter.

Cinnamon and vanilla extract: The flavoring agents in the cinnamon toast

Pinch of black pepper: totally optional, but give a nice enhanced spice flavor

See how to make this in the video in the recipe card.

You can actual prep the bread up to the point of spreading it with the butter/sugar mixture, then freeze it in a single layer on a baking sheet until hard. Once frozen, you can transfer the sliced bread to a freezer safe bag.

To cook the frozen cinnamon toast, follow the same steps. You don’t need to thaw it before air frying, you may just need to add 30 seconds to 1 minute of cooking time.

What to serve air fryer toast with:

While I enjoy this plain, you can also add some icing sugar for visual appeal, or drizzle some syrup or honey on them for extra sweetness.

You can also serve with jam. My kids like the toast cut up into strips!

Can you use gluten free bread?

Can you make this in a rack style air fryer?

Definitely- you’ll be able to cook more at the same time. The slices on the lower rack may take an extra minute or two to cook.

How do I know when the bread is ready?

When it is crispy and golden brown. Different bread thicknesses will take different amounts of time, so just keep an eye on the toast and remove it when it’s to your preference.

How can I switch this recipe up? 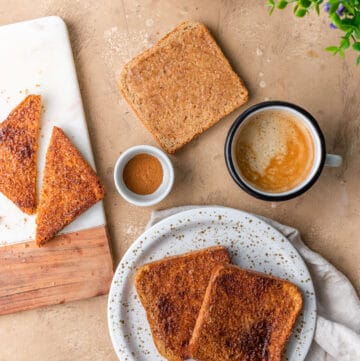 Making in advance: This is best enjoyed fresh, but you can prep the butter sugar mixture ahead of time, store it in the fridge, and bring it to room temperature to sfoten before spreading on the bread and air frying. Storing leftovers: Leftover cinnamon toast can be stored 1-2 days in the fridge and reheated in a warm oven, or microwaved (But it’ll probably get a little soggy). This is best eaten fresh. Doubling the recipe: You can easily double or half the recipe. If doubling, just air fry in batches.