Fluffy, unbelievably good cinnamon rolls made with brown butter dough and topped with a smooth cream cheese frosting. Step by step photos and all you need to perfect cinnamon rolls at home!

You can’t get anything tastier than homemade cinnamon rolls. And you’ll never feel more accomplished than when you make dough, roll it out and bake it into perfect golden brown scrolls. The smell that fills your house will be amazing- and actually, it’s probably a lot simpler than you fear!

This recipe is comprised of three different components. The dough, the filling and the frosting. Let’s take each individually to see the ingredients and process:

This means we are making an enriched bread dough that has eggs and butter in it, kind of like brioche. I’ll go into some more detail about some of the ingredients:

Flour: I used to make a cinnamon roll recipe from Allrecipes, which this is based off that uses bread flour, but I couldn’t source it in my quarantine and knew regular flour would be easier to find for everyone. I switched to regular plain flour and I don’t regret it- they turned out great! If you do want to use bread flour which has more protein, it’ll make for a slightly chewier end results, not a bad thing at all.

How to brown butter:

I love brown butter and use it in a lot of applications. It’s basically taking butter, melting it, then going even further. Use unsalted butter and cook it on the stove until it starts to turn an amber brown in color with brown solid flecks at the bottom of the saucepan. It will start to smell nutty and delicious. Use a heavy bottomed saucepan so it doesn’t burn, and keep stirring on medium heat. Once the butter has browned, immediately remove it to another bowl so it doesn’t cook further and burn. Make sure you get all those brown flakes scraped out to use with the butter, that’s where all the flavor is!

Milk: To activate the yeast, the milk needs to be warm but NOT hot. if it’s too hot, it will kill the yeast. You can warm the milk in a small saucepan, or in the microwave like I did. The simple rule of thumb is you should be able to stick your finger in it without it being uncomfortably hot, rather it should feel like bath water. If it’s too hot, just let it cool a little. If you want to be specific about it, an ideal temperature between 105-115 F degrees (40-45 C). Use whole milk ideally, or reduced fat (2%), not skim.

Eggs: To enrich the dough. Take your eggs out before starting the recipe so that they are room temperature, and will incorporate more easily into the dough.

Sugar: Regular white sugar for the dough. Brown sugar will be used for the filling. I did get a comment from someone who tried making this with coconut sugar and liked it, but haven’t tried it myself!

Yeast: I used instant. Active dry could be used too, but would take longer to rise.

Brown sugar and cinnamon are all you need for the filling ingredients. I like using dark brown sugar for a more deep molasses like flavor, but light can also be used.

The filling is easy! You just take a generous amount of cinnamon and brown sugar and mix them together, then mix them into the softened butter. You can use your fingertips to do this, or just smush everything together with a spoon. I found this method easier than trying to spread butter on the dough then sprinkling with brown sugar and cinnamon.

Soft butter, soft cream cheese, icing (powdered) sugar, vanilla and salt. The butter and cream cheese have to be soft so they combine without lumps, so take them out of the fridge well in advance. Vanilla enhances the flavor, and so does salt by helping to offset that cloying sweetness.

I like sifting the icing sugar to also prevent any lumps in the frosting when combining.

How to make homemade cinnamon rolls:

For the dough, you dissolve the yeast in the warmed milk. You add the rest of the dough ingredients: sugar and eggs, then the flour and salt. No vigorous kneading is required, just give it a good stir with a wooden spoon, then a few kneads with you hands if there are still flour patches that haven’t been incorporated.

The dough goes through two rises. The first rise happens as soon as the dough is mixed, and is an hour long, until dough has doubled in size.

After it’s risen, transfer it to a lightly floured surface, stretch it out a little and let it rest for 10 minutes. This can be the time in which you make your filling.

Once dough has been filled, cut and assembled in baking pan, it goes through another 30 minute rest, at which you’ll see the rolls puff up. This is the best time to preheat the oven.

A lot of people online swear by the dental floss trick, where you take unflavored dental floss and use it to slice the dough. I tried this, and I found it difficult for some reason! I found it much easier to just use a sharp knife and cut though. If you want to be precise, you can use a ruler and portion off equal notches in order to get 12 cinnamon rolls. These will be big, fat and fluffy!

You want to bake in an oven that’s been properly preheated so that the dough bakes evenly. I placed them on a parchment paper lined baking sheet to avoid the filling leaking onto the pan and sticking making it difficult to remove the rolls. As soon as the doughs are light golden brown, remove them from the oven, and wait 5-10 minutes before frosting the rolls.

You want them to still be warm and delicious to enjoy, but not so piping hot that the frosting will melt right off.

How to make overnight cinnamon rolls:

After rolling the cinnamon rolls and cutting them up, place them on the same pan you’ll bake on (with the parchment paper and everthing). But instead of letting them rise for another 30 minutes at room temperature, cover well with plastic wrap and place in fridge overnight.

Cinnamon rolls can be frozen in dough form or after baking.

To freeze unbaked: Once they filled and cut, before the second rise, place in a pan and cover tightly. Place in freezer. The day before you want to bake them, thaw in the fridge overnight, the next day take them out of the fridge, let them come to room temperature then rise for 30- 45 min, until puffy and nearly doubled in size. Preheat the oven while rising and bake as directed.

To freeze baked: Allow them to come to room temperature, then either as a pan or individually, freeze them covered well. I’ve done this both frosted and not frosted, both ways worked out well. I’ve had them 2-3 months after freezing and they were still delicious! Heat either in the microwave for 20-30 seconds , or in a hot oven for 10-15 minutes. You can even freeze a batch of the frosting, preferably individually in mini zip lock bags to use at whim! 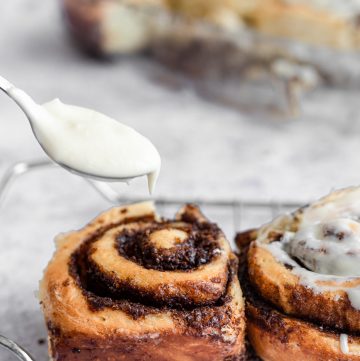 Recipe very heavily adapted from Clone of a Cinnabon recipe on Allrecipes.   For making the recipe a day ahead: After rolling the cinnamon rolls and cutting them up, place them on the same pan you’ll bake on (with the parchment paper and everthing). But instead of letting them rise for another 30 minutes at room temperature, cover well with plastic wrap and place in fridge overnight. The next day take the cinnamon rolls out of the fridge and let the cinnamon rolls come to room temperature then rise for 30- 45 min, until puffy and nearly doubled in size. Preheat the oven while rising and bake as directed.