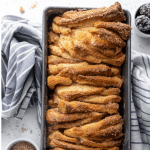 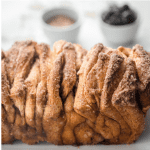 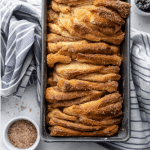 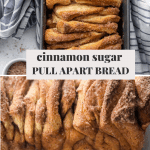 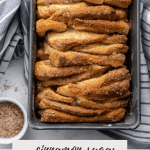 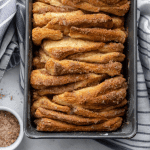 This cinnamon sugar pull apart bread is a showstopping recipe. Just follow the simple steps to get this beautiful loaf of yeasted cinnamon bread out of your oven. Make ahead instructions included!

This bread looks like it was terrifying to make, but is actually so simple. All that’s required is patience, waiting for the dough to rise. Yeast rewards us all for our effort though! It rewards us by leading us to the fluffiest, softest bread, warm from the oven. Also, whenever you bake a yeasted dough and it comes out really good, you can’t help but feel a great sense of accomplishment. Just follow the steps, and you too can conquer dough!

My source for this recipe was Joy the Baker (I posted her Chocolate Loaf Cake earlier). This recipe came out with a bang years ago, leading to endless riffs on pull apart bread. Apple pie pull apart bread, jalapeno cheddar pull apart bread. I’ll have to try both some day, but I can never tear myself away from the classic. It’s just tooooo good. Layers of sweet yeasted dough are filled with a browned butter cinnamon sugar mixture and baked in a way that you can pull one square of dough off at a time to eat. It’s like an ultimate cinnamon roll but in loaf form- and you don’t even need a glaze. This is probably my husbands favorite thing ever that I make and I can’t fault his judgement at all.

The dough is a simple affair, slightly sweetened with sugar and enriched with melted butter and eggs. You can mix by hand, or you can use a stand mixer fitted with a dough hook like I did. The original recipe calls for mixing by hand so don’t worry if you don’t have a mixer. It’ll end up be slightly sticky, so resist the urge to load it with extra flour.

What you can do, and what I prefer to do, is to refrigerate the dough overnight after the first rise, so you can continue with the remaining steps and have a fresh baked loaf without too much delay the next morning. Just take the dough out of the fridge, let it come to room temperature for around 30 minutes, then continue with the below instructions of rolling it out and the second rise.

You brown some butter, (easy! remember this recipe?) , and set it aside. You mix together cinnamon, sugar and nutmeg and set that mixture aside. You’ll proceed to brush the dough with the melted browned butter that’s cooled, then sprinkle the sugar cinnamon mix on top. Sound tempting yet?

After the dough has rested, you knead in a couple tablespoons of flour. and this will make it less sticky. You then roll it out into a 12×20 inch rectangle on a lightly floured surface (or as big a rectangle as you can get without the dough splitting apart). You then brush the browned butter on top, and sprinkle with the cinnamon sugar mixture. It seems like a lot of sugar, but that’s ok, you’re going for it.

You use a pizza cutter to slice the dough into six equal strips (top to bottom). Stack the strips on top of each other, then cut into six equal pieces again. You’ll end up with six stacks of six squares. You’re well on your way to cinnamon sugar pull apart bread!

In a greased pan, you’ll place the dough squares sideways. You might have to squeeze to get them to all fit in the pan. It’ll look like a dough accordion! Cover with a damp kitchen towel, and let it rest for 45 minutes in a warm place or until almost doubled in size. 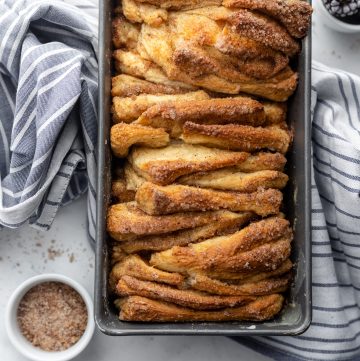 Recipe from Joy the Baker *To make this ahead for the next day, refrigerate the dough, covering in plastic wrap, after the first rise. The next day take it out of the fridge and let it come to room temperature for about 30 minutes before proceeding with the recipe.   ** See this recipe for more detailed butter browning instructions