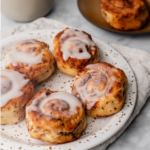 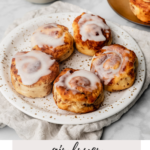 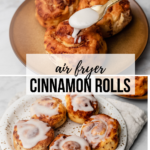 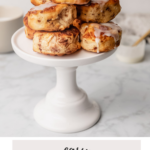 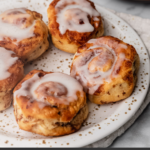 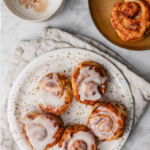 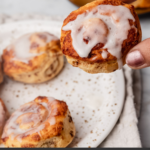 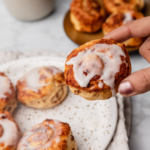 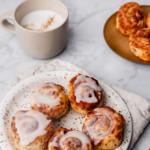 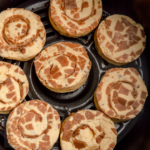 A game changer, canned Pillsbury cinnamon rolls in the air fryer get crispy and golden on the outside, and soft and gooey in the center. Takes half the amount of time as they would in the oven, and they taste so much better. You’ll love these easy air fried cinnamon rolls!

What are air fryer cinnamon rolls?

Very simple, these are cinnamon rolls made in an air fryer instead of an oven. You can use your own cinnamon roll dough (and air fry until golden brown and cooked in the center). You can also do what I did, and use ready made Pillsbury cinnamon rolls, the ones that pop out of a tube, come with ready made frosting, and that you enjoyed throughout your childhood? YUM.

Why make pillsbury cinnamon rolls in an air fryer?

They taste SO much better! Similar to how air fryer pizookies are crispy and golden on the outside and soft and gooey on the inside, that’s how these cinnamon rolls turn out.

Air fryer cinnamon rolls take half the time that they would in an oven.

They are such an easy way to prepare store bought cinnamon rolls, and conveniently, one Pillsbury 8 count can fits perfectly into an air fryer basket.

What ingredients do I need to make these?

Alternately, you could line the air fryer with parchment paper cut to the basket size- you’d need to add it at the same time that you’re placing the rolls in to avoid the parchment paper from flying up in the circulation.

How long to cook cinnamon rolls in an air fryer?

I found that my favorite air frying time was 6 minutes at 350 F (180C). This gets golden brown and fully cooked cinnamon rolls that still have a soft center.

After 3 minutes of cooking time, I turn each cinnamon roll over to cook evenly on the other side.

If you think your rolls aren’t finished at 6 minutes, add an extra minute or two of baking time, watching carefully.

Watch the video in the recipe card to see the process from start to finish!

What type of air fryer is best to use for this?

I’ve found the Ninja Air Fryer and the Phillips Air Fryer both work perfectly well for air frying. Just check on the rolls after 6 minutes and see if you need any longer, as each air fryer might come to temperature at a different time.

Yes! Since homemade dough is usually bigger than the store bought Pillsbury dough, you’ll probably only be able to fit 4-6 in the air fryer basket, and they’ll probably need a full 8 minutes.

Keep checking on them, and take them out when golden brown and cooked through! Try my recipe for the perfect fluffy cinnamon rolls.

What to serve air fryer cinnamon rolls with:

I just keep it simple and serve them with the frosting that comes with the can, but you are welcome to make your own frosting. I like the cream cheese one in my go to cinnamon roll recipe. Just make sure you don’t frost them until they are done cooking.

Store leftover cinnamon rolls up to 3 days at room temperature or up to one week in a air tight container in the fridge. Gently rewarm in the microwave, or even in the air fryer for a minute.

Can you make these cinnamon rolls in a Ninja foodi?

Yes you can! Use the air crisp function, and air fry at the same temperature and time.

Can you use any brand of canned cinnamon rolls in an air fryer?

Yes, any store brands should work, as well as homemade rolls. In case of any size deviation, just keep an eye on them. You might have to add a minute or two of air frying time.

Is it better to spray the air fryer or use parchment paper?

Whichever you prefer, either works. A light non-stick spray will keep the rolls from sticking, as will parchment paper placed in the basket at the same time as rolls are.

How long will Pillsbury grands cinnamon rolls in the air fryer take?

Air fry for 8 minutes, then if you need to add an extra minute or two until they are done. 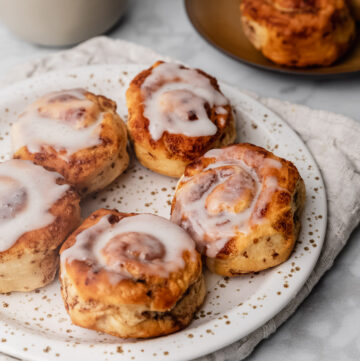 If you like your cinnamon rolls crispier, go ahead and cook for 7-8 minutes total. Storing leftovers: Leftover cinnamon rolls can be stored for up to 3 days at room temperature or up to one week in a tightly covered container in the fridge. Gently rewarm in the microwave, or even in the air fryer for a minute.