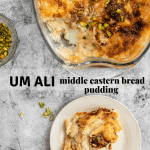 Post originally published May 2020, republished with an updated video just in time for Ramadan!

This Um Ali recipe gives you a very traditional Egyptian dessert that is like an extra special bread pudding. It’s delicious- creamy, sweet and comforting, with an assortment of nuts for those so inclined. It’s incredibly easy to put together and a staple dessert for special events in the Middle East.

What is Um Ali?

Um Ali literally translates into “Ali’s Mother”, named after the wife of a ruler in the Ayyubid empire in Egypt who used to make it for her husband. It’s a complete classic that’s been around forever, and makes an appearance on any buffet table you’ll ever frequent in Ramadan.

What is in Um Ali?

It’s a traditional bread pudding with pastry, sugar, milk, nuts, and raisins. Spices are optional (like cinnamon, saffron, cardamom, etc). I made this one without any of the spices and it came out beautifully, but embellish if you like!

What makes this recipe so good?

It’s sweet and milky, warm and comforting and has a gorgeous mix of textures. The nuts, the crunchy edges of the puff pastry, the soft middle of the soaked pastry, the broiled cream topping. It smells amazing the second it comes out the oven.

It’s fun to do a more exotic version of bread pudding, and it’ll open up your culinary horizons.

And best of all, it’s so incredibly easy.

Puff Pastry: My pastry of choice is the classic for this dessert, baked puff pastry. I like to brush the raw puff pastry with a little butter and sprinkle with some sugar before baking because it gives a wonderful hint of sweetness and richness and the perfect crunch!

Milk: I use whole milk for richness. Some recipes call for heavy cream for the pastry soak, but I found the milk rich enough, especially since the whole bread pudding is topped with cream and broiled.

Sugar: Simple granulated white sugar to sweeten the milk, and not too much. 3/4 cup is the perfect amount to give sweetness that isn’t overpowering.

Heavy Whipping Cream (plus sugar and vanilla): We lightly sweeten the heavy cream and add a little vanilla if you like, then whip it up into soft peaks. This is to top the Um Ali with before broiling which gives an amazing golden brown thick layer on the top.

Assorted Nuts and Raisins: A Um Ali recipe is traditionally layered with mixed nuts. Use whatever you like! I used cashews, pistachios, dried shredded coconut, and raisins. I actually do NOT like raisins in my desserts, but I wanted to keep this authentic. Feel free to leave the raisins out!

How to make Um Ali:

First bake the pastry: Brush the puff pastry with some softened butter, sprinkle with a little sugar, and bake (spaced out so they don’t overlap) on a large baking sheet at 390F (200C) until golden brown. This took me around 20-25 min.

Let the pastry cool so you can handle it, because you’ll be tearing this into pieces and layering in a serving dish. The first layer will be about 3/4 of the pastry.

The next layer will be the assorted nuts and raisins

Make the milk soak for the pudding: Heat the milk and sugar until sugar dissolves and milk has just boiled. This hot milk will be poured on to the nut and pastry layer in the dish.

Top with the remaining 1/4 of the puff pastry.

Whip the heavy cream, vanilla, and sugar until soft peaks form. Spread this over the top of the puff pastry.

Put the oven function onto broil, same temperature as before (390F/200C), and place the Um Ali in the middle rack of the oven (so it’s not too close to the broiler). Broil for 10 minutes until golden brown and bubbling.

How to serve and store:

I highly recommend serving this fresh out the oven. That’s when it’s at its most delicious.

That said, you can reheat leftovers in a moderately hot oven (300F/150C) until warm. Leftovers will last 2-3 days in the fridge.

If you want to assemble in advance, I recommend making the different components without assembling, because the longer the pudding sits, the more milk it’ll soak up and it’ll be less saucy.

I would whip the cream and keep that in the fridge, bake and shred the puff pastry and set that aside at room temperature, and combine the milk and sugar in a saucepan without heating.

When it’s time for you to assemble and bake, you just need to heat the milk, pour it over the puff pastry and spread whipped cream on top and bake.

The good thing is this Um Ali recipe only takes 10 minutes in the oven, so you can do this on the spot! 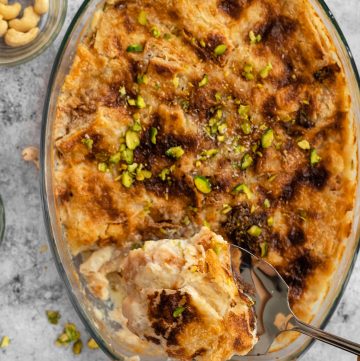 For the milk soak: