Incredibly easy brisket made in a slow cooker and cooked to tender perfection in an healthy homemade bbq sauce, and finished off in a hot oven for that gorgeous caramelized crust.

Besides being one of my favorite ways to eat beef ever you mean? Brisket is a unique cut of meat, usually from the lower chest of the cow. It is inexpensive, because it remains tough unless you cook it over a long period of time, which is why a slow cooker comes in handy for this recipe.

The thing that’s so interesting about slow cooked brisket, is that it can be sliced, and that slices will remain intact without falling apart. It can also easily be shredded. This gives you total flexibility- do you want shredded brisket sandwiches, or do you want some thick slices of brisket to enjoy. Or both at the same time?

I’ve made brisket previously in the oven and it was great. After making it for the first time ever in a slow cooker however, this is definitely the way to go. What you do:

Spice Rub the Brisket: Rub the raw brisket all over with a mix of spices, including and not limited to : brown sugar, paprika, garlic powder, cumin, oregano, mustard powder or mustard seeds, salt and pepper. We’ll get that spice rub in good to maximize the flavor. You can go on to immediately cook the brisket, or marinade it up to 24 hours in the fridge. I like doing this the night before cooking, and preparing the bbq sauce that same night, so that the next day all I need to do is place both in the body of the slow cooker and turn it on.

It’s such a good bbq sauce. Most recipes call for 1/2 cup of sugar, while this only requires a pinch. You simply mix together tomato paste, water, sugar, some herbs, dijon mustard and apple cider vinegar. It’s tangy and delicious. I have to thank the Real Food Dietitians for the sauce inspo. I just barely adapted it from them, and from this post Slow Cooker BBQ Beef .

Cook! You’ll pour the sauce into the slow cooker, add the brisket, and cook on low heat for 8-10 hours . Prod it with a fork, try a little piece after the alloted cooking time, and if you feel it isn’t tender enough, just keep cooking!

Once the brisket is nearly ready, you’ll heat an oven to 390F (200 C). This is so you can rub the cooked brisket with a little oil and bake it in the hot oven for an extra 10 minutes or so or until it caramelizes and turns dark golden brown.

While this is happening, turn the slow cooker up to high and continue cooking the bbq sauce until it reduces and thickens slightly.

I really can’t believe how good something can taste with such little effort!

Can I make this without a slow cooker?

I haven’t tried it, but it should be just fine. You’ll place the seasoned raw brisket uncovered in a roasting pan in an oven 150 C (300F) oven for one hour, then pour in the bbq sauce with extra water-at least 1 cup of extra water. The water should make up about 1/2 inch of liquid in the roasting pan. Cover tightly, and continue cooking for 3-3.5 hours or until fork tender.

How to serve the brisket:

I kept it simple, slicing the brisket and serving with mashed potatoes. I also had a side of shockingly good cauliflower mash for the more health conscious.

Alternately, you could shred the brisket and use it to top sandwiches. Serve with pickles and sweet potato fries .

Cooked brisket will last 3-4 days tightly covered in the fridge, but I doubt you’ll have any leftovers! 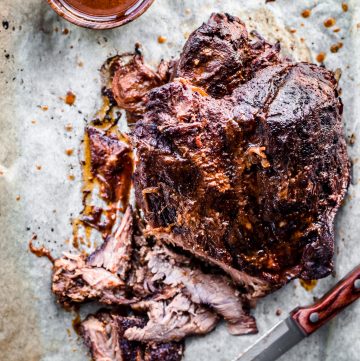 For the spice rub:

For the bbq sauce:

For the bbq sauce: