A baked cheesecake that’s creamy and rich (and really easy-no water bath required) with a lotus biscuit infused crust and lotus biscoff spread. This is going to be your new favorite dessert!

What is lotus spread anyway?

Lotus biscoff spread has been very prominent in the spotlight in the Middle East for a while now, and it doesn’t look like it’s changing anytime soon. The popularity of Nutella (chocolate hazelnut spread) has been expanded to include Lotus spread (cookie butter spread). Similar to peanut butter in consistency, it instead has the flavor of cinnamon biscuits. Basically the flavor of the famous Lotus biscuits (which I’ll always associate with international flights) but in a spreadable form. Has to be good right? It also comes in crunchy or smooth variations, but just like peanut butter, I prefer the smooth. I use smooth in this recipe, but feel free to switch it up if you like!

It’s actually a natural pairing! Much more natural than Nutella cheesecake in my opinion. The cinnamon graham flavor of the spread mimics the crust so it has a really nice harmony. Cheesecake is a little tangy, so the sweetness of the lotus offsets it. I made this for the birthday of a friend who is both lotus and cheesecake crazy and it was a big hit, so I knew I had to share it here.

We also use melted butter to bind the crumbs and a pinch of cinnamon for extra flavor. I don’t like adding any sugar to my graham cracker/digestive type crusts (just like this one) because the filling is always sweet enough and I hate the feeling of sugar crunching between my teeth.

The filling: This cheesecake from All Recipes has never steered me wrong and has rave reviews, so I adapted that for this recipe. It has cream cheese, sour cream and milk, a trifecta of dairy for the ultimate creamy factor. You also add eggs, sugar, vanilla, and a touch of flour.

The topping: The real biscoff factor here comes from microwaving some of the spread until runny and spreadable, and pouring it on the finished cheescake, as thick a layer as you like it. Then, garnish with extra whole lotus biscuits and lotus crumbs as desired.

What cream cheese should I use?

I’ve always used the Philadelphia tubs, because 3 of the 300g ones gives exactly the amount needed for this recipe, but you can also use Kiri or Philadelphia blocks.

How to get cracker crumbs:

To make the crust, you need crushed biscuit or cracker crumbs. I sometimes put them in a large freezer bag and whack them thoroughly with a rolling pin. Alternately, you can process them in a food processor until fine.

Mix with the melted butter and a pinch of cinnamon until moistened all over then you’ll press this into your prepared pan. I like using the bottom of a measuring cup to really pack the crust smoothly into the pan to avoid it crumbling when cut.

Getting a lump free cheesecake:

Make sure all your filling ingredients are at room temperature before mixing ( the cream cheese should be softened, room temperature milk, room temp eggs, and room temp sour cream). This will enable them to mix together much more easily without any lumps.

The process is very simple. You cream together the cream cheese and sugar, add the milk then eggs one at a time, then the sour cream, flour and vanilla. Your filling is ready!

A crack free cheesecake- do I need a water bath?

What causes a cheesecake to crack? Usually it’s one of these culprits:

You have a couple options if you want to avoid your cheesecake cracking. This recipe calls for the easier one which is #1 below:

Still have cracks? No problem! That’s the fun in a recipe that is covered with a topping, it’s really easy to disguise them. Just garnish smartly to cover the crack in the center. The cheesecake pictured in this recipe had a big old crack that I just spooned some lotus spread into and covered with extra lotus biscuits. (I was a little impatient and didn’t let it cool in the oven for the allotted time)

How do I know when my cheesecake is done?

I’ve always followed the 60 minutes stated in the recipe with no problem at all, so I advise doing that. Signs that your cheesecake is baked is to have set edges, a little golden and puffy, but still a softer center that might be a little jiggly. Don’t worry, it’ll set as it cools and that’s what keeps the cheesecake so creamy and soft.

You need to keep it in the fridge, tightly wrapped, where it’ll keep for 5-6 days. You can also store it whole or sliced in the freezer for 6-8 months! Thaw in the fridge overnight.

So without further ado, go make this luscious lotus biscoff cheesecake and let me know what you think in the comments below!! 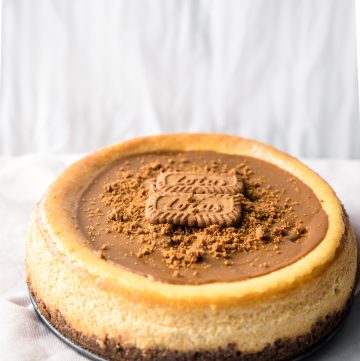 Cheesecake filling from All Recipes Leftover cheesecake will last 5-6 days in the fridge. You can also freeze slices tightly wrapped and they will last 6-8 months.