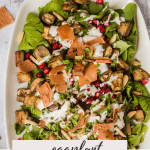 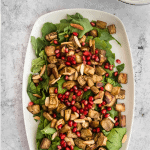 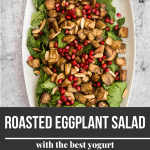 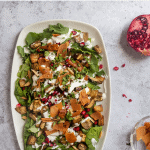 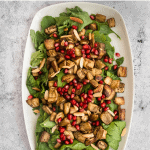 This eggplant pomegranate salad is a delicious salad with a lot of different textures and flavors. Easy oven roasted eggplant is combined with juicy pomegranate seeds, toasted nuts, greens, and an addictive yogurt dressing. It’s a total winner, and it comes together so easily!

What’s so good about this eggplant pomegranate salad?

I love eggplant in all its forms. I think dishes become automatically upgraded when eggplant is added to them. This is definitely the case with this salad, which is hearty and filling due to the addition of eggplant.

Although it is a filling salad, it still works perfectly as a side dish to a lot of meals. I love serving it with Middle Eastern style meals, like this roasted leg of lamb, oven baked chicken shawarma, and Lebanese chicken and potatoes.

Eggplant and pomegranate are a match made in heaven. The earthy eggplant is lifted by the bright tanginess of the pomegranate seeds, which are also so visually appealing.

Also, the yogurt dressing is ADDICTIVE. It’s so good and so easy, you’ll make this and use it on everything!

How to roast eggplant for the salad:

I never bother with frying eggplant cubes. It’s a lot messier and the eggplant soak in more oil that way.

Rather, I employ a simple method to perfectly roast the eggplant cubes. I like to cut them as evenly as I can so that the cubes cook evenly. I toss them generously with olive oil, season with some salt (I also used sumac in this recipe), and place them in a single layer on a parchment paper lined baking tray.

Single layer is important, when you don’t overcrowd the eggplant, they become crispier and won’t steam and turn soggy.

Heat oven to 410 F (210 C), and once hot, the eggplant cubes go in. Halfway through roasting- at around the 10 minute mark- give the cubes a good toss, shaking them around, and making sure you spread them back out into a single layer. This will ensure they cook evenly on all sides.

I also recommend using smaller eggplants. This will help prevent the bitterness you sometimes get with eggplant, and eliminate the extra step of salting eggplant and placing over a colander.

What you need to make this salad:

Greens: I like using Arugula (jarjir in Arabic) or rocket leaves. The bitterness works really well in this salad.

Pomegranate seeds: 1/4 cup or as many as you like

Toasted nuts of choice: I really love pine nuts or sliced almonds in this. Toast them by heating over medium heat in a little olive oil in a skillet for a few minutes until golden brown, then remove immediately to a paper towel lined plate to drain so they don’t over cook. Watch carefully, they go from light golden brown to burnt in seconds!

Toasted pita bread cubes: Totally optional, but it does give some wonderful flavor. I like using kitchen scissors to cut up pita bread into little cubes or diagnols. Similarly to the eggplant, I never deep fry the pita cubes. I place them on a baking sheet, drizzle well with olive oil and toss, then bake at 180C for 8-10 minutes or so until deep golden brown, tossing halfway through.

How to seed a pomegranate easily:

The basic concept is to roll the fruit around first to loosen the seeds. Score it in the middle then twist it open into two halves. Use a wooden spoon to whack out any stubborn seeds.

I will say, I find it much easier and less messy to get my pomegranate already seeded when possible!

What dressing goes with an eggplant salad?

A yogurt dressing of course! Yogurt is a great pairing with eggplant, especially when it’s enhanced with a little minced garlic. The dressing also includes mayo, but please don’t let that deter you. You won’t be able to taste it, it just gives such a creamy richness.

It’s a nice thick dressing, so it won’t make the salad soggy in the least. That’s why I included instructions for drizzling the greens lightly with olive oil before adding the rest of the layers.

Making the eggplant salad in advance:

There are definitely some components you could prepare in advance, and which I often do.

I sometimes roast the eggplant the day before and keep it in the fridge. You can also store roasted eggplant cubes in the freezer. I do this a lot and it always makes for a welcome find!

Nuts can be toasted in advance and kept on the counter for a few days.

You can also prepare the dressing the day before, and store in the fridge. 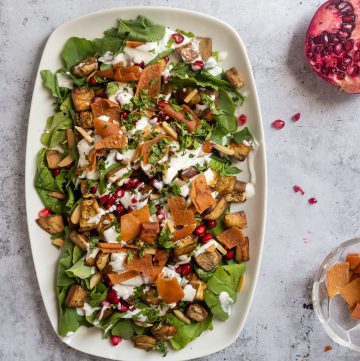