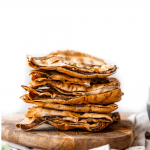 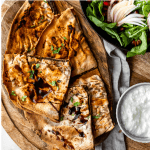 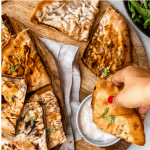 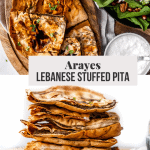 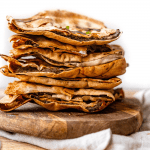 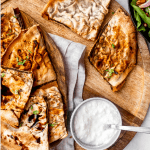 Arayes are a Middle Eastern classic, of spiced meat (kafta) stuffed into pita pockets and grilled or baked until crispy and golden brown. They are so easy to make and so yummy! You’ll love this Lebanese delight.

The word arayes in Arabic literally translates to “brides”, but I have no idea why this is called that! Arayes are a meat stuffed pita bread, that are grilled, barbequed or baked in a hot oven until the bread is golden and crispy, and the meat cooked through.

Arayes are also referred to as hawawshi in the Egyptian dialect.

Why should I make arayes?

They are so easy. It’s a matter of mixing together a meat filling, filling pita bread with that meat, and cooking the pita pockets.

This recipe is made even easier because of the cooking being done in the oven instead of on an outdoor bbq or on a grill pan. I find that this still gives a crunchy and delightful arayes, without all the extra effort.

These are so kid friendly. That crispy bread and meat mixture is a winning combination, especially when you give kiddos a bowl of yogurt to dip the pita in.

My daughter Layla literally asked that I make these every single day for lunch. While I won’t go that far, I’ll definitely be making them very frequently!

The recipe is versatile. Throw in any meat you like, mix up the spices, half it, double it. It’ll all turn out good!

What ingredients do I need to make arayes?

The meat stuffing is basically kafta, with the addition of pomegranate molasses (optional but recommended) I have a recipe for kafta here, and for kafta bilsanieh (kafta in a tray with potatoes, tomatoes and onions in a tomato sauce- kind of like Middle Eastern meatloaf) here.

Meat: My preference is a 50/50 mix of beef and lamb, but you can use all of one type of meat if preferred.

The herbs: Fresh chopped parsley imparts a lot of flavor in this, and is crucial to kafta’s flavor. Finely chop the parsley after washing so it mixes in well.

The spices: salt, pepper, seven spices (or all spice or mixed spices), cinnamon, cumin, a pinch of red chili flakes.

Onion and garlic: The key is pureeing or grating the onion so you don’t get big chunks of onion that aren’t appealing to bite into. You can use the rough side of a cheese grater, or just process in a food processor.

If you do choose to process the onion in a food processor, you can throw in the parsley and chop it that way too!

Pomegranate molasses: A characteristic flavor of arayes, this tangy and flavorful molasses is a staple item in Middle Eastern cuisine. It gives the meat just a little sweetness. You can usually find this in Middle Eastern supermarkets. I’ve made arayes without it before, and they are still delicious so don’t sweat it too much if you can’t find it.

Pita bread: You can use large or small pita bread, whole wheat or white. The amount of meat you can fit in will differ according to the size.

Olive Oil and salt: Before baking the pita bread triangles, you’ll drizzle evenly with olive oil and sprinkle with salt to get that crunch and a little flavor from the salt

Tomato paste: Something my mom does is rub some tomato paste on the outside of the pita bread. It gives a beautiful dark red color in places, and adds a tart tangy flavor. I do it with some pita breads, and leave some plain for my kids.

How to make the kafta mix:

It’s the easiest process ever! Once you have your parsley chopped and your onion grated, there’s nothing to it.

Simply mix together all the ingredients in a large bowl. I like using gloved hands so I can really work in the spices and herbs into the meat. Give it a good mix!

You can also pulse the onion in a food processor, as well as the parsley, then add the meat and all the other ingredients in and pulse. You have to be careful with this though and barely pulse once the meat is added so that you don’t overwork the meat and it ends up too dry.

Once the meat is all mixed, it’s ready to be used to fill the pita bread.

Cut each pita bread in half. You can do this two ways, either by cutting in half so that you have two half circles with a pocket in them, or you can cut them the other way, sort of peeling the top half of the pita off the bottom half.

Either way, fill with a good amount of meat filling. You’ll probably use about 1/4 cup of meat per bread half, and spread it evenly so that the thickness is the same throughout.

Once filled, cut each pita half into half again so you are left with pita quarters.

Place on a baking sheet lined with parchment paper, spreading them out so they aren’t overcrowded, making it easier for them to crisp up. Drizzle or brush with olive oil on both sides and sprinkle a little salt on top. If using tomato paste, gently rub a little tomato paste onto the outside of the bread.

Bake at 400F (205C) for 18-20 minutes. Flip over halfway through. Arayes are done when they are crisp and golden brown and the meat has cooked through.

What to serve meat stuffed pitas with:

I’m a huge proponent of serving with extra pomegranate molasses drizzled on top. These are also great with yogurt on the side. They are very commonly dunked into yogurt. You can also serve with tahini on the side for a change. I also do really like a simple green salad with these, something like arugula, sliced red onion and pomegranate seeds.

Leftovers keep well in the fridge for 2-3 days. They reheat well in a hot oven, and in a microwave (although they might get a little soggy in the microwave).

These freeze very well for up to two months. Freeze first in a single layer on a baking sheet until set, then you can place them in a freezer bag all together. They’ll thaw quickly, and you can even bake/reheat directly from frozen. 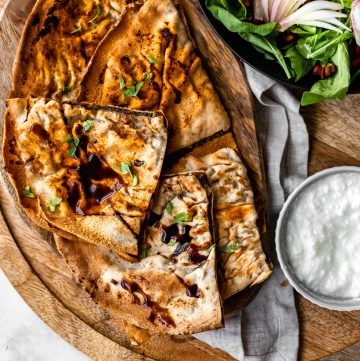 You can find the original recipe for kafta here. Kafta bilsanieh is another delicous iteration, where the kafta is baked in a pan with potatoes, tomato slices, onions and tomato sauce for a Middle Eastern style meatloaf.