This cake is a soft fluffy pineapple juice infused yellow cake that’s topped with a cream cheese vanilla pudding mixture, pineapples, whipped cream and toasted coconut and pecans. It’s one of those cakes that are so light you can’t stop eating. An all time favorites!

The sun is shining, the birds are chirping, and your stomach is rumbling. This bright and yellow cake evokes sunshine and happiness and I think it’ll please just about anyone!

Just like one of my other favorite cakes, this uses a cake mix. (shh, no one needs to know). You need yellow cake mix, pudding mix, canned pineapple, heavy cream, and the toppings of your choice. I really like toasted pecans and toasted coconut here. This comes together easily and is a good make ahead dessert because it tastes great straight out of the fridge.

You make your cake mix as specified by the package directions, but instead of adding the water called for, add the drained pineapple juice from your can of pineapple. This sneaky little substitution is going to give you a world of flavor. Bake your cake, and cool it. Meanwhile, your pudding gets mixed up then combined with the cream cheese, and you whip some heavy cream separately for that final top layer. If using toasted coconuts and pecans, this is how to toast them:

How to make sweetened whipped cream:

All you need to do is combine cold heavy cream, 2 tablespoon of icing sugar, and a teaspoon of vanilla in the bowl of a stand mixer and mix at medium high speed until soft peaks form. The addition of this small amount of sugar and vanilla gives a mild fragrant sweetness to the cream.

How to toast your nuts:

Heat oven to 180 C (350F). Spread the pecans on one baking sheet in an even single layer, and the coconuts on another baking sheet. Toast for 5 minutes, stirring midway through. Watch carefully because these can burn fast!

Your cooled cake gets topped with the pudding cream cheese mixture, then with your pineapple chunks, the whipped cream, and the toasted pecans and coconuts. Store in the fridge until ready to serve-this is delicious eaten cold. Keep leftovers in the fridge tightly wrapped and they can be enjoyed for a few days although I doubt it’ll last you that long! If making ahead, add the toasted nuts at the last minute so they retain their crunch. 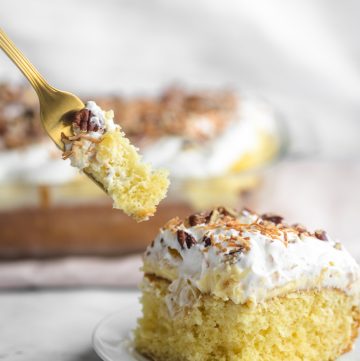 To toast the pecans and coconut:

For the sweetened whipped cream:

If making ahead, top with pecans and coconut last minute so they don’t soften. Recipe inspired by this recipe from Taste of home.