This is an incredibly simple and moist, no mixer needed, 5 minutes of effort chocolate bundt cake. The taste defies how minimal your efforts are. Fudgy, somehow both dense and soft with molten pockets of chocolate. It is a guaranteed hit, and it starts with quite a big cheat- cake mix!

I don’t usually like using cake mix because it’s much more rewarding to make a cake from scratch, but I can’t argue with a recipe that’s received accolades from every reviewer that’s tried it on allrecipes.com , where I got this recipe from. One of the first cakes I’ve ever made when I started baking, it’s simple, moist and chocolatey. It’s also more than that. It’s delicious! If you’d like a moist chocolate cake made from scratch, be sure to check out this recipe here.

The chocolate bundt cake base:

It can’t get much simpler. Chocolate cake mix, sour cream, pudding mix, vegetable oil, eggs, and hot water. The moistness of the cake comes from a few factors. Using oil, adding sour cream, and the pudding that gets incorporated in the cake to produce a velvety texture. Trust me when I say, this is probably as moist as you can get!

You bake this in a bundt cake pan until a toothpick comes out clean, but with just a few crumbs attached is fine, it’ll just up the gooey factor. My mom has made this into cupcakes before which turned out delicious, but I love the simplicity of a bundt.

You can top this with the simple chocolate glaze recipe that’s provided, which I recommend if you are taking this to people or serving this to guests. It elevates the cake and makes it look really pretty. It’s also easier to garnish because your mini chocolate chips or sprinkles will stick to the glaze when it’s still wet (But not too warm, or the chips will melt). I’ve also made this multiple times without any glaze, and just dusted some icing sugar on the top. It’s certainly rich enough to eat unadorned.

Drink something with this, an ice cold glass of milk or a strong cup of black coffee to cut the sweetness. This is a great make ahead dessert because it stays moist when well covered for days. 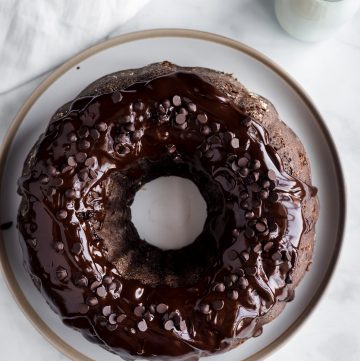 For the chocolate cake:

For the chocolate glaze: (optional)

For the chocolate cake:

For the chocolate glaze: