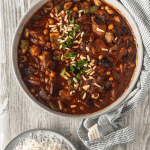 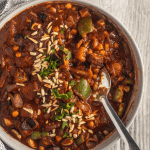 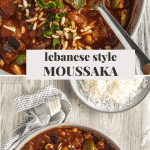 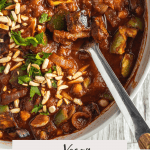 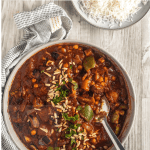 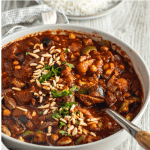 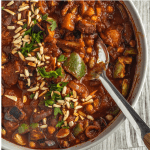 This Lebanese moussaka is a hearty, delicious, veggie filled stew packed full of flavor. You really won’t miss the béchamel topping, with this Lebanese style eggplant, that happens to be a vegan moussaka!

What is Lebanese moussaka?

Moussaka is traditionally a Greek dish with eggplants/and or potatoes in a rich meat stew, topped with a creamy white sauce and baked.

However, we have a Middle Eastern moussaka very common in the Levantine region of the Middle East. It’s a lot lighter, with no creamy sauce at all, and can be made with or without meat. It’s often referred to as Maghmour. Lebanese Moussaka never tasted so good!

It gives all the hearty and delicious flavor that you’d expect from moussaka, but instead of attempting a vegan bechamel or vegan cream sauces, it makes the whole thing so much easier by just omitting the creamy layer. You really won’t miss it!

The combination of eggplant, chickpeas, and bell pepper make this so filling and full of delicious contrasting textures.

The eggplant in this recipe is roasted instead of fried, a healthier, easier, and much less messy option.

It’s a highly adaptable dish, you can throw in any veggies you like, omit any you don’t, swap out the spices.

It tastes even better the next day! The flavors really develop overnight in the fridge, so this is one of the few times I like leftovers more than the fresh dish.

What ingredients do you need for this dish?

The veggies: Eggplants, diced tomatoes, chickpeas, and a green bell pepper. This is a winning combo! Lots of sliced caramelized onion, and garlic for flavor.

The spices: I used seven spices, commonly used in Middle Eastern cooking. You can make your own via the recipe here, or just use any mixed spice you have and like. I also use cinnamon, along with black pepper and salt. Kept it simple, but feel free to add paprika, chili powder, garlic powder, anything you like!

The sauce: Crushed tomatoes, plus some additional tomato paste to deepen the flavor. I also added a touch of pomegranate molasses which I LOVE, especially in tomato based applications. You can find this at any Middle Eastern specialty store, it has a really special flavor, tangy and sticky and a little sweet. If you can’t find it, you can either leave it out or substitute with balsamic vinegar. The sauce is also thinned out slightly with 1/2 cup water.

Roasting the eggplant: I personally prefer roasting eggplant to frying it. Frying soaks up a lot of oil, and can be really messy and time consuming to have to stand over the frying pan. Roasting is a lot easier, and I enjoy the flavor a lot more.

Assemble: Mix together the stew, the roasted eggplant, and the diced bell pepper and pour into a baking dish. Cook in a preheated oven for 30-35 minutes, covered in foil so it stays saucy, until bubbling.

FAQs and expert tips for the best Lebanese Moussaka:

Don’t be afraid of spicing this up with warming spices like cinnamon, and feel free to add more spice like dried cumin, paprika, dried coriander.

Cook the onions through thoroughly to soften and slightly caramelize them before adding in the rest of the ingredients, this gives great flavor.

You can leave out the chickpeas if you like. You can also substitute other veggies, like okra, zucchini, sweet potato. Make this to your taste!

You can also add ground beef or lamb to the skillet after the onions caramelize, and turn this into a non-vegetarian moussaka. Super yummy too!

If you like the sauce to be thinner, you can add more water.

What to serve this Lebanese eggplant dish with:

This would be delicious with couscous, or quinoa. You could have this plain, or dip some pita bread in it to eat it, also a common practice..

You can have this dish warm, room temp or cold. It’s delicious any way!

Leftovers will last tightly covered in the fridge for 4-5 days. You can reheat in the microwave or on the stove top.

This dish will freeze well, in a tightly covered container for 2-3 months. Thaw overnight before reheating. 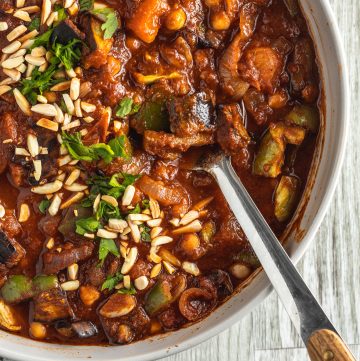 To roast the eggplants:

Enjoy this with Vermicelli rice, with pita bread, or plain! Pomegranate Molasses is a common ingredient used in the Middle East that has a distinctive tangy sweet flavor. If you can’t find it, you can leave it out, or add a splash of balsamic vinegar and a pinch of sugar to the sauce.