An incredibly easy and foolproof recipe for all butter pie crust that comes out golden brown and perfectly flaky. Pie baking will never seem intimidating again!

How good is pie? I love me some pie. And what I love more than pie is pie crust. My mom, I kid you not, eats pie filling and leaves behind the crust. It’s blasphemous, but even better for me. This way I get my crust and hers too 🙂

A good pie crust has to be golden and puffy, flaky and delicious. There’s nothing more disappointing then soggy under baked pie crust. Luckily, pie crust is EASY to make. Especially when you follow the instructions in this recipe, adapted from Everyday Annie.

Part of the ease in this comes from always having the ingredients on hand. I always have a ton of butter in my fridge, but never have shortening. That’s why I almost never make anything with shortening in it.

Butter: The star of this show. The butter needs to be cold, hard and cubed. What I do is cut the butter while it’s still cold, then immediately put it back in the fridge until I assemble the rest of my ingredients. The reason we want it to stay cold is because we want the butter to retain it’s shape even when mixed in with the rest of the ingredients. Butter is added to the dry ingredients and mixed just until it incorporates, but with small pea sized pieces still intact. These pieces will melt IN the oven instead of outside the oven. This results in flaky little pockets because of the steam the butter lets off as it melts (butter has a lot of water in it).

Ice Cold Water: The water should be really cold, so we keep the pie dough cold – again, we don’t want the butter in the dough to melt till it goes in the oven. I fill a cup with cold water and ice, and keep it in the fridge, then measure out the tablespoons of water directly from the cup of ice water.

How to make the pie crust:

Using a stand mixer fitted with a paddle attachment makes this so easy. You could also use a food processor, or go old school and just make this by hand.

The dry ingredients need to be combined first. Then the cold cubed butter goes in, and mixed on medium low speed until the mixture looks like wet sand and you have little pea sized clumps of butter. Finally, the ice cold water goes in and is mixed until a ball of dough just forms.

If doing this in a food processor, you’d follow the same steps, but pulse instead of mix. By hand, you’d work in the butter cubes with your finger tips or preferably a pastry cutter to keep the butter from getting too warm.

Chilling and rolling the pie dough:

The pie crust needs to chill for at least 30 minutes in the fridge. After that, you can roll it out on a lightly floured surface using a rolling pin into a circle slightly larger than your pie plate. That’ll go into your pie plate to be the bottom crust. Trim any excess dough, and patch any parts where the dough looks thin.

This recipe makes enough for two pie crusts, meaning you have a top and bottom crust. If making this for single crust use, then you can store the extra crust for later. Store tightly wrapped for 3 days in the fridge or for up to 3 months in the freezer. Thaw for several hours in fridge before using, then roll out as directed in recipe. 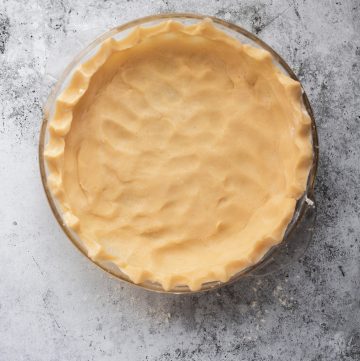 Pie dough can be stored tightly wrapped in the fridge for 3 days or freezer for 3 months. To use after freezing, thaw for several hours in the fridge, then roll out as directed.   Recipe adapted from Everyday Annie