This endeavor into homemade naan came about after I made a delicious healthy vegetarian curry. Completely hearty and warming and good for you- and just screaming for some simple carbs. Yes, I had the requisite fluffy basmati rice, but I wanted a pillowy thick bread that could soak up all that good sauce. Therefore, I started searching for a simple naan recipe that I could easily take on in my kitchen. My search didn’t take long, a recipe immediately jumped out at me for all the five star reviews it received. I hauled in the services of my kitchen helper (my 4 year old daughter Layla) and we started kneading, rolling and cooking up some delicious naan bread. More bread made its way into my daughters tummy then on to the serving plate, but her help served invaluable. No joke, she saw me struggling to roll the bread a little with my giant wooden rolling pin and immediately scampered off, only to return with her mini little play doh rolling pins. They worked so much better! Thank you Layla. This is a really fun project to take on with kids who like being in the kitchen.

The base naan dough:

The naan bread dough is very simple. You combine dry ingredients (flour, salt, sugar,and yeast). In a separate bowl, you combine the wet ingredients (water, yogurt, and olive oil. You then mix everything together with a fork or your hands (no stand mixer required!) Once a dough forms, you’ll leave it to rest 1-1.5 hours until doubled in size before continuing.

The fastest way to get your dough to rise is to let that happen in a warm place. You don’t want it to be in an ice cold air conditioned room, because it will rise but probably slower. A trick I picked up somewhere is to turn on your oven for a few minutes before making your dough then turn it off. Once the dough is mixed you can let it rise in the oven (in an oven safe bowl, and make sure the oven is barely warm not actually hot so that the dough doesn’t start baking.) You can do the same thing with a laundry dryer (Turn it on for a few minutes then off and let the dough rise in it) if you are using your oven for something else! Alternately, just ignore me and let it rise on your counter. It’ll be fine..

You’ll take the risen dough and tip it out onto a floured counter. Dust the top of the dough with some flour too, and shape the dough into a rectangular shape. Cut the rectangle into 6 equal portions. Using a flour dusted rolling pin, you’ll roll out each of the six portion into a rough oval shape. If dough starts to stick just dust some more flour on top. You’ll want it relatively thin because it’ll puff up when cooking.

I used a cast iron skillet which I didn’t have to grease, but if using a regular skillet, grease lightly with some butter. Heat on medium high heat until very hot, then place one of your oval shaped rounds of dough on it. Cook on one side 1-2 minutes until golden/dark brown bubbles form and some parts of the naan char. Flip over and do the same on the other side. Once cooked, brush the naan with some melted butter (that’s mixed with some crushed garlic if desired). Full recipe details below! 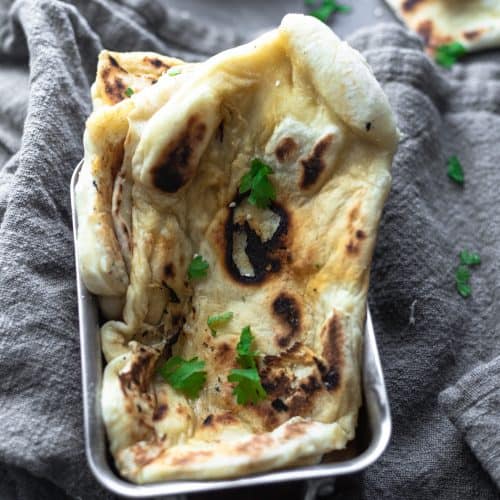 Recipe from Once Upon a Chef. Naan can be frozen and reheated.