Ropa Vieja is a stew consisting of shredded beef in a tomato sauce base with plenty of vegetables like bell peppers, olives, and onions. It’s rich and full of flavor, and wonderfully tender when made in a slow cooker. Ropa Vieja is the national dish of Cuba!

What is Ropa Vieja?

The name “Ropa Vieja” translates in Spanish literally to “old clothes”. There are a number of reasons people claim that the name originated. One is because the appearance of the shredded beef stew resembles colorful old rags. Another legend states that a poor old man once shredded and cooked his own clothes because he could not afford food to feed his family. He prayed over the cooking stew and miraculously, it changed into a tasty meat stew. How could I not make something steeped in such culture, especially when it involves slow cooked beef, one of my favorite things to eat. Recipe is inspired by this video, but I did it slow cooked instead of sous vide.

What is in Ropa Vieja?

Beef: I used rump, but chuck roast and flank are other very traditional choices. You don’t need a fine cut of meat because even a tough meat will break down into tender shreds with this cooking process.

Bell Peppers: I used red, yellow and green. Gives lots of color and flavor to this dish.

How to make the Ropa Vieja

You start with braising the meat in a hot pan to brown. You then sautee the onion and bell peppers, add the spices, then add the diced tomatoes, water and soy sauce.

Instructions for making without a slow cooker:

Follow all the steps for the recipe, but instead of placing roast and sauce mixture into the body of the slow cooker, place in a large oven safe dish. Cover tightly with foil, and braise on the lower rack of a 120C (250F degree) oven for 2.5- 3 hours or until beef is tender and easily shreds.

What to serve with?

Traditionally, you’d have fried plantains which I WISH I could have served with, but can’t find in Bahrain. I served with brown rice, but typically this would be served with white rice and black beans. I also had some tortillas on the side for whoever wanted a taco type situation. You could even serve this with potatoes or sweet potatoes.

How to store Ropa Vieja

Leftovers will keep tightly covered in the fridge for 3-4 days. I haven’t tried freezing it, but I expect it would freeze well for 2-3 months. 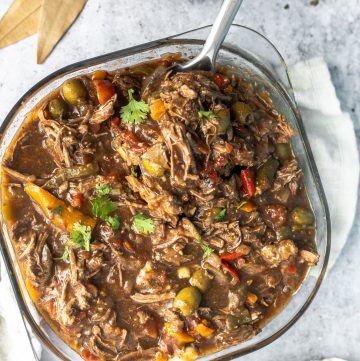